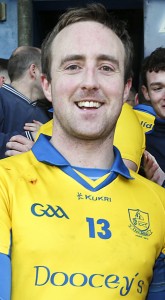 Benji Whelan’s eyes welled with pride, drawing breath following one of the greatest days in the history of Gaelic Football in this county. And no, that’s not an overstatement.
In turning around a five-point half-time deficit, edging ahead in the closing moments of a pulsating second half, and ultimately emerging as five point, extra-time winners at this magnificent venue, The Nire reached a new level.
And every Waterfordian who made the trip to West Cork left ‘Clon’ at least a foot taller after a display of heroic proportions.
I’ve never seen a Waterford football team, be it club or inter-county level, play with the purpose, quality and conviction The Nire produced last Sunday.
They did it when it mattered most, they did so in the face of adversity, in front of a partisan crowd, and they found that additional gear with no little style.
A second Munster Senior Final appearance in three years, secured after an eighth successive weekend in action for their club in both codes, is just reward for a team who had heroes all over the paddock.
And Benji Whelan’s emotions, in the wake of their 2-15 to 1-13 win over Cork champions Carbery Rangers, were as thoroughly merited as they were easily explained, heart pounding on sleeve.
“I’m immensely proud,” said the Nire boss. “It’s fantastic for the group. The club gave me a chance three years ago to come in and do what I do. I was a novice – I still am in many ways – you can ask the management team about that! It’s fantastic for the club that we’re getting these kind of displays out of that group – they’re a special group of players.”
He added: “Someone stopped me there and said it was fantastic, having the subs weigh in the way they did, but they’re first choice players for us too, we just don’t have enough room for all of them on the team sheet. And they understand that well, to their credit. They all came in today and did well, but that didn’t surprise me as I’ve no question in my minds about any of them. It’s horses for courses at times and they understand that. And they could be called on again in two weeks’ time…
“You come down to this kind of environment against a really strong outfit like Carbery Rangers and you expect them to damage when they have the ball – and we were handing the ball back to them in the first half.
“So I felt myself once we cut that out, things were going to go an awful lot better for us. I’ve said in previous interviews about these lads, I’d never question their heart, their commitment and their determination. They had to stand up and be counted there today and they did that fantastically well in the second half.”