The official launch of the FAI-ETB Player Development Course took place at the WIT Arena, Carriganore on Monday, December 9th. John Delaney, CEO of the FAI, launched the course along with Kevin Lewis who is the CEO of WWETB. Numerous staff members from the Waterford and Wexford Education and Training Board were also present.Paddy Carey and Mark Barry will be the coaches during the year long course and Paddy Carey explained what is involved with the scheme. 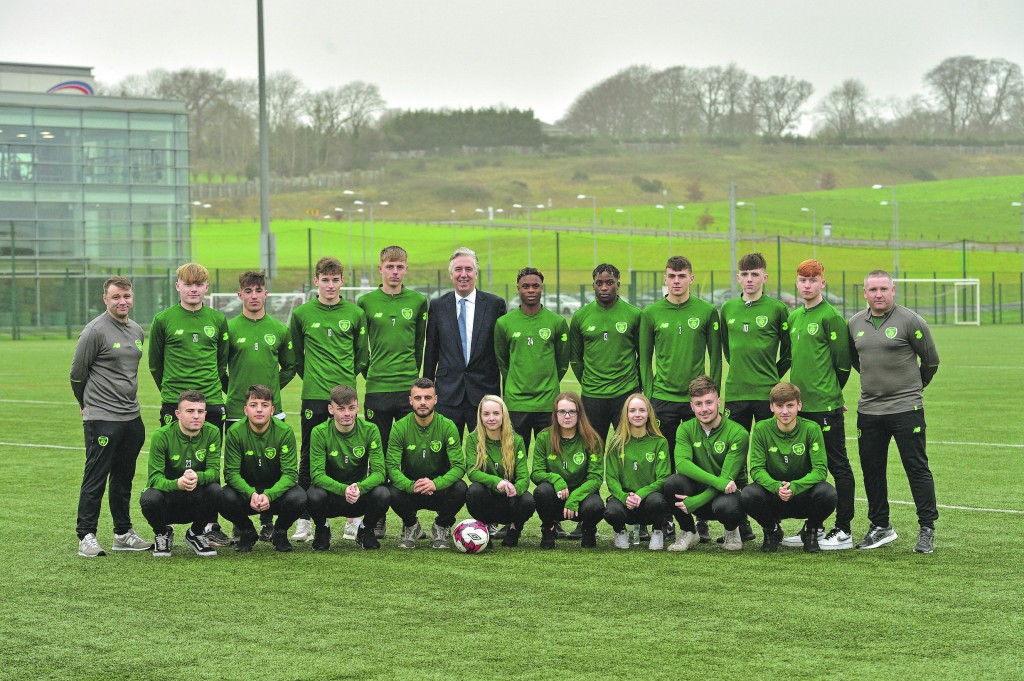 “The students will be able to gain up to 400 CAO points which is fantastic and they will also get the chance to play football every day of the week. It could be described as a sort of back-to-work scheme if you like. It really is a superb opportunity for young people to succeed in both their academic and football careers. It has been up and running in Dublin for a number of years and also in places like Limerick, Cork, and Mayo. Dundalk have got it going recently also and now we are on board here and to have the magnificent facilities we have here is brilliant. Some international players came through this scheme so there is a chance for all of them to succeed if they put the work in.
“We are starting with 23 learners and the law of averages will probably mean that all of them won’t succeed but if we can get a large amount of the 23 through the twelve months that would be great. They could go on to secure further education either here at WIT or maybe Carlow IT or some other third level institute. On the football side of things some of the students are grassroots players but on the other hand others are playing with Waterford FC and they could be playing European football next year. At this stage of their lives a lot of kids are not sure what path they want to follow and that is fine because academic wise this is a Level Four course and will be a little bit easier for them. Personally I think it is an ideal way to mix football with education and I know they will enjoy the 12 months with us.”
Paddy, who was an Academy Manager with Reading FC until a few months ago, said he believes he made the correct decision to come back home to work with the FAI. “I suppose I was thinking about this move for some time and the offer from the FAI was just too good to turn down and so far everything has been great and I am really looking forward to getting stuck into this project along with Mark Barry and of course with the learners.”
Gary Power, the FAI Development Officer for Waterford City and County was equally as excited about the launch. “This is a real red letter day for us because we have been trying to get this to Waterford for a number of years and now we have got it over the line which is great. You hear stories about young footballers who come back from England and Scotland and so on and they are totally disillusioned because they have not got a proper education to fall back on. This scheme is something of a gap year for the students here today and apart from their education they will get wonderful football coaching from Paddy Carey and Mark Barry.
Some of the players on this course play for the Waterford FC Under 19 team and others play in the local Junior League. We also have players from Kilkenny and Wexford and three girls who play in the Waterford Women’s League. “I suppose the FAI get criticised when it comes to the top level topics but the work they are doing at grassroots such as this should be appreciated. Already Paddy and Mark have something in the region of 30 to 40 names for the 2020 course so there is no doubt this will be a huge success.” John Delaney opened up proceedings and he said he was delighted to be asked to launch the course.
“I am a proud man to be here today because I was born in Waterford and I have a long association with Waterford FC and Waterford United. This course down through the years has produced international players like Kevin Doyle and Shane Long and hundreds of players who have played in the League of Ireland and continue to do so have also. I would like to wish the students who are starting this course in Waterford all the luck in the world and I know they are in good hands with Paddy Carey and Mark Barry and of course the tutors here at WIT.”