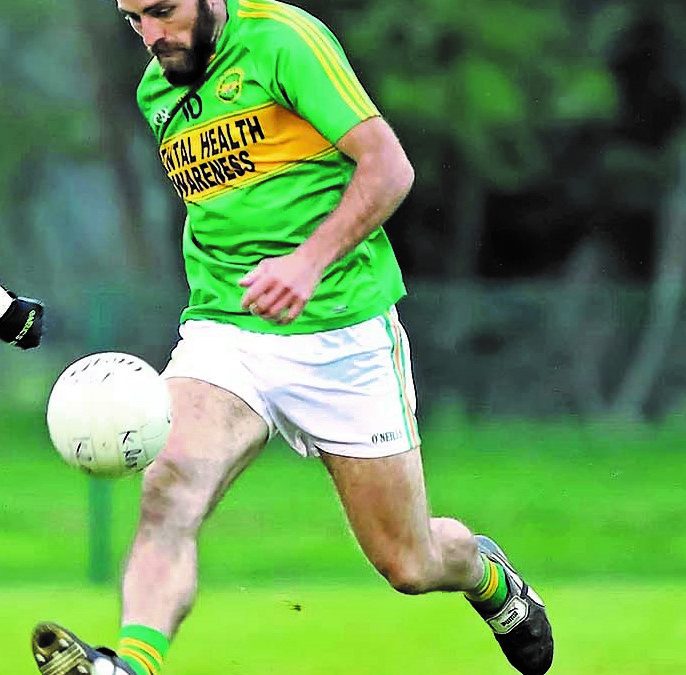 County Senior Football Championship
Kilrossanty 2-11
Brickey Rangers 1-11
Kilrossanty were warmest of favourites to advance to the quarter final stages of the County Senior Football Championship but they were made to work very hard for the win against a gritty Brickey Rangers who outscored last year’s championship runners up 1-9 to 0-6 in the last 25 minutes. Gate receipts of just over €900 was taken on the night which amounted to a sizeable attendance for a stand-alone championship game when you factor in season passes and children attending the game. 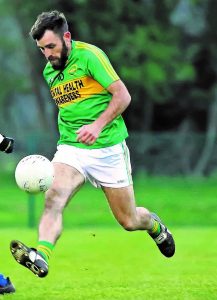 Conor Hayes in action for Kilrossanty during the championship Photo: Sean Byrne

Early on it looked like Kilrossanty were on their way to an easy win as they hit early scores off the boot of Paul Keating and Stephen Prendergast for an early lead, one which they never gave up.Brickey Rangers got off the mark on seven minutes with a point from Conor McGrath but it was quickly followed by the Comeragh Men’s first green flag of the evening as Joey Veale beat Tommy Lynch after he was picked out by Donie Fitzgerald.
Almost straight away Stephen Prendergast fisted over the crossbar to give his side a five-point cushion.
Kilrossanty’s second goal, which coincidently was their next score, came on 20 minutes and again it was Joey Veale who finished to the net to put his side comfortably in front.
Conor McGrath pulled a point back from a free for Jim McGrath’s charges, but points from Joey Veale and Stephen Prendergast followed to extend the winners lead.Brickey Rangers finished the first half the stronger of the two sides as they kicked a point from Sean Lennon. Tommy Prendergast cancelled out Lennon’s effort and Niall Collins reduced Kilrossanty’s lead before the break at which point the Comeragh Men held a 2-6 to 0-4 advantage.Two early second half scores for Brickeys from Conor McGrath left just Joey Veale’s goals between the sides but Veale edged his side seven points in front with his first non-green flag score of the evening.
Brickey Rangers were right back in the game with 23 minutes remaining when they scored a crucial goal.
Ciaran O’Neill spotted Dwaine Kirwan off his line and he coolly lobbed the ball into the back of the net to leave just four-points between the teams.
Points from Cormac O’Grady (two) and one from Conor McGrath closed the gap on Kilrossanty and Brickey Rangers had every chance with the game going into its final quarter.Kilrossanty had two great chances to well and truly wrap up the game but they came up against one of the best goalkeepers in the county in Tommy Lynch who first did well to keep an effort from Pa Whyte out of his net after he was picked out by Joey Veale.
Shortly afterwards Joey Veale had a chance to complete his hat-trick when Kilrossanty were awarded a hotly disputed penalty but he saw his effort from 12 metres saved by Tommy Lynch.
The Kilrossanty man made amends for his miss shortly afterwards when he put over a free. Conor McGrath and Conor O’Grady landed points for the side in Black and yellow which left just two between the sides, but in stoppage time Pa Cunningham ensured last year’s runners up were in the quarter final draw.
Brickey Rangers finished the game with 14 players on the field as they had Johnny Cooney side off on a straight red card which means that he will miss this weekend’s relegation playoff against Kilmacthomas.