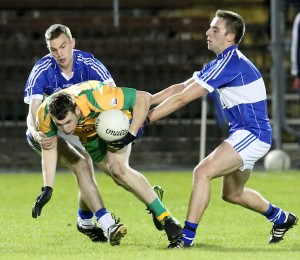 Brian Phelan’s fisted goal, six minutes from time, salvaged last Saturday’s Intermediate Football Final for Ballinameela, an unlikely scenario for much of the hour such was Bonmahon’s superiority.
Inspired by the outstanding Micheál Harney, the Copper Coast club should have been home and hosed by the time Phelan diverted Jim Curran’s pass beyond Brendan Murphy.
They twice led by four points in this contest yet, despite only really finding some form in the closing minutes of this contest; Ballinameela hung on in there and forced a draw despite bobbing against the ropes repeatedly.
A second chance is a path well beaten for ‘Meela, having required a second outing against the Geraldines to emerge from the West, and one wonders might that count against them in tomorrow (Wednesday) night’s replay at the same venue (7.30pm).
Bonmahon hit the ground running, with John Roche opening the scoring after just 50 seconds. A fine surge down the right flank from Dylan Power was complemented by a fine finish in the sixth minute before Micheál Harney and Richie Walsh set Ciaran Buckley through for another point three minutes later.
And when Ciaran Hearne made it four points without reply in the 13th minute, Bonmahon fans were understandably giddy. In contrast, Ballinameela, with the exception of the dynamic Micheál Culloo, looked incredibly flat.
Critically, the blue and white got off the mark in the 16th minute through Jim Curran, and when Tom Curran added a free three minutes later, they’d halved the deficit despite enjoying so little territory.
Seven minutes later, Niall Queally, fed by Harney, converted another high-quality score for Bonmahon, but a Tom Curran free in stoppage time completed the first half scoring to leave the gold and green 0-5 to 0-3 ahead.
After the break, Ballinameela found some form, with Curran tagging on another free a minute in, while he was denied a clean strike on goal when Brendan Murphy advanced from his goalmouth in the 36th minute. That opportunity was compounded by Ciaran Buckley’s point at the opposite end, assisted by the excellent Richie Walsh.
Walsh himself converted a 41st minute free and repeated the feat seven minutes later to leave Bonmahon in a match-winning position inside the game’s final quarter.
But Ballinameela, despite a laboured display, never threw in the towel, and Brian Phelan’s 49th minute point left just a goal between the sides.
Tom Curran’s 51st minute free further reduced their arrears but the superb Harney landed a marvellous point from Bonmahon’s next attack to leave the seasiders three clear.
But Ballinameela made their next goalscoring opportunity count when the towering Phelan fisted the ball home from a couple of yards to register, remarkably, only their third score from play in the 54th minute. Suddenly, there was wind billowing in Ballinameela sails.
But Richie Walsh, a thorn in the Meela side all night, landed a score from an acute angle wide on the right, a point worthy of a higher grade, to send Bonmahon ahead once more.
A pretty flat contest produced a nerve-shredding conclusion, with both Jim and Tom Curran shooting wide for Meela before they drew level yet again.
An ill-advised short free deep in the Bonmahon defence was turned over by Ballinameela in the 64th minute, and Jim Curran, a prominent figure in Ballinameela’s late resurgence, struck the ball between the uprights to level this Final and force a replay.
The replay was scheduled for tomorrow (Wednesday) night given that the winners are due to line out in the Munster Championship on Sunday next. Incidentally, last Saturday’s Final brought in a €2040 gate.
Bonmahon: Brendan Murphy; Eoin Fitzgerald, Ciaran Buckley, Kieran Roche; Niall Queally, John Roche, Fionn Buckley; Patrick Queally, Mícheál Harney; Richie Walsh, Jonathan Fenton, Ciarán Hearne; Dylan Power, Shane Dwan, Conal Queally.
Scorers: Richie Walsh (0-3; 0-2f), Ciaran Buckley (0-2), Ciaran Hearne, Micheál Harney, Niall Queally, John Roche and Dylan Power (0-1).
Substitutes: Jeff Hally for Patrick Queally (12 mins) and Cian Hally for Jeff Hally (62).
Ballinameela: James McGrath; Stephen McGrath, Colin Walsh, Shane Flavin; Jason McGrath, Kevin Phelan, Micheál Shine; Brian Phelan, Lorcan Looby; Mikey Phelan, Tom Curran, John Harrington; Jim Curran, Brendan Phelan, Micheál Culloo.
Scorers: Brian Phelan (1-1), Tom Curran (0-4f) and Jim Curran (0-2).
Substitutes: Kealan Looby for John Harrington (HT) and Rob Shine for Mikey Phelan (46),
Referee: Pat Casey.