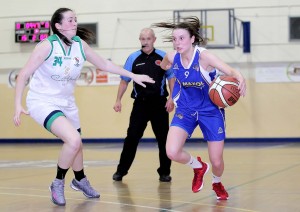 Maxol WIT Wildcats delivered a determined performance against Kildare side Liffey Celtics last Saturday evening in the Mercy Sports Hall and despite a significant height disadvantage Wildcats were deserving winners.
Wildcats wanted to continue their winning ways following their narrow first win of the season last weekend and went about achieving that goal from the very start.
American star Katie Fox controlled the game making incisive drives to the basket throughout.
By the end of the first quarter Wildcats had eased into a 15-9 lead they would not for the remainder of the game.
The taller players from Liffey Celtics were winning the rebounds but the work rate of every Wildcats player forced their opponents into making mistakes, to the delight of the home supporters.
The Kildare girls fought back to within one basket at half time 34-32. WIT student Helena Rohan had a fantastic game and at the beginning of the third quarter Helena was unstoppable as she finished some excellent baskets.
Jazmen Boone, who is a Sport changes Life Victory Scholar like her American teammate Katie Fox, gave another solid display and her strength on both ends of the court helped Wildcats stretch their lead to 11 points at the end of the third quarter.
Ruthie Leavey made it difficult for the Celtics inside players and team captain Sinead Deegan lead by example with her ‘never say die’ attitude.
Helena Rohan deserves a special mention as she continued her good run of form and finished the games top scorer on 25 points.
Coach Evans will be very happy with the efforts of all his squad as this was an important win and demonstrates that Maxol WIT Wildcats can compete successfully at the top tier of Irish basketball.
He now has to prepare his team for one of the toughest weekends of the season as they travel to Cork next weekend to take on the unbeaten League and Cup champions Glanmire on Saturday evening.
Then on Sunday Maxol WIT Wildcats face Brunell in the Parochial Hall, a venue where a result is always hard fought.
Top scorers for Maxol WIT Wildcats were Helena Rohan (25) Jazmen Boone (17) Katie Fox (10).
Underage Update
Wildcats U16 team travelled to Cork’s Parochial Hall on Saturday to participate in the Area Board tournament. They played two group games against Fr Matthews and a Cork East selection. Fr Matthews proved to be a tough game with Wildcats coming out on top by nine points. Against the Cork East selection Wildcats started at a whirlwind pace with full court pressure. The Cork side had no answer, leaving Wildcats to run out easy winners. In the semi final they came up against old rivals Brunel , but this was to be a mis-match from the outset with Wildcats dominating every facet of play to win comfortably.
A special mention must go to Shauna Fitzergald who was shooting the lights out and proved to be unstoppable. Up next was Fr Matthews in the final.
Wildcats started off slowly and were soon down by eight points – a lead which would take them four quarters to pull back. A lacklustre performance was costing Wildcats dearly, down by six with a minute and 30 seconds left Wildcats got a surge of energy and dominated this passage of play.
Down by one point with 20 seconds on the clock, Wildcats had numerous opportunities to win but failed to take them. With time almost up Debbie Ogayemi caught a rebound and as she was going back up the buzzer went but the ref had called a foul. Two shots, two to win, one to draw, Debbie duly obliged with one free throw to send it to overtime. Baskets from Maggie Fanning and Aisling Madigan saw Wildcats win by four in overtime to claim the cup.