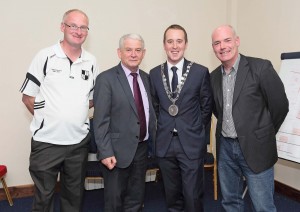 Sitting down to select the standout Waterford GAA story of the year, after a remarkable 2015 on the field of play for our hurlers, ladies footballers and camogie players, is no easy task.
It’s hair-splitting stuff, given the honour that so many fantastic talents brought to their native sod, and it’s been a privilege to tag along for so many great, trophy-winning adventures.
Yet, for me, the most uplifting and inspirational story of 2015, be it sport or news for that matter, was off the pitch, as the people of Waterford and the wider GAA community came through for St Saviour’s GAA Club and the Ballybeg community. And how.
On Tuesday night last, chatting happily with club members, Gaels and locals, at the official re-opening of a Clubhouse which had been gutted by the January 24th arson attack, I found myself in the best of company.
And the contrast in emotions, nine months on from arguably the darkest day in the club’s history, couldn’t have been starker.
Out of the smouldering ashes of that late January morning, the club has sustained and renewed itself. In fact, it’s arguably never been stronger.
And in the wake of the three arson attacks that befell Ballybeg that appalling week, this community, at a moment of crisis, rallied, declared ‘no more’ and earned the respect and support of the people of Waterford and beyond.
And, brick by brick, what was destroyed was rebuilt, with the City & County Council hopeful that it can redress other dereliction issues in the neighbourhood in due course. And at its greatest moment of difficult, those who run St Saviour’s GAA Club identified an opportunity: to renew their Clubhouse. To renew their spirit. To revive their parish. To uplift the spirit of the community it’s so proudly a part of. And my goodness, how they’ve succeeded on all fronts.
“There’s always a way out of things, it mightn’t feel that way when you’re facing into a problem, but there’s always a way out things,” said St Saviour’s Chairman Mark Corcoran. “And I think what’s been done here over the past few months proves it. The Boxing Club has proved it and the Ballybeg Resource Project is in the process of sorting itself out but that will take a little more time, but they’ll get there.”
Mark added: “This is a fantastic community. I’m a very proud Ballybeg man, and I won’t let anyone say anything about Ballybeg.
“I remember Paddy Joe (Ryan) making a statement back in 1999 when Waterford won the All-Ireland Junior Football title, and we were in Dungarvan, and Paddy was up on a container giving a speech when he said ‘From Ballymacarbry to Ballybeg’ and that stuck in my mind – to have that on the top of his tongue was fantastic and it was a very proud moment for us as a club.
“We fly the flag for football in this city, and that’s something we’re very proud of too, and we love our hurling as well, and that can’t be forgotten. This is a facility we’re very proud of as a club and we wanted to show our appreciation for all the help and support we’ve had in the last few months – and not just from the GAA, who’ve been brilliant. Other sports clubs and ordinary Joe Soaps around the city and county have been so good to us, and we’ll never forget that.”
Good people have made great things happen in Ballybeg since late January, and from the most appalling of episodes, a club has renewed itself. Well done to all on a job brilliantly done.