Jordan Norris Reports
Reading midfielder Charlie Adam has faced a litany of world-class opponents down the years – Eden Hazard, Luis Suarez, Wayne Rooney to name but a few. However, it’s unlikely anyone ever mugged off the Scottish international as badly as he was on Saturday week last.
With the ball dropping loosely in midfield, Millwall’s Jayson Molumby didn’t even take a second glance as Adam pressed behind him, flicking the ball over the Scotsman’s head and leaving him for dust, with the kind of consummate ease that one can only applaud – so much so, that was how Adam chose to react. 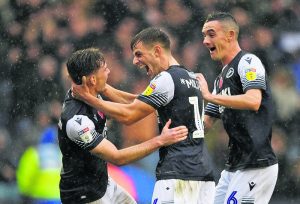 Jayson Molumby celebrating with Shaun Hutchinson and Shaun Williams during Millwall's 1-0 win over Brentford in the EFL Championship recently.

Molumby’s performances in the heart of the Millwall midfield have been nothing short of outstanding in his first season of regular first-team football. The Lions lie in seventh in the EFL Championship table, just outside the play-off places, largely due to the dynamism and at times maniacal pressing of Molumby which sets his side on the front foot.
Currently on loan from Brighton, the Cappoquin youngster has performed to rave reviews since staking his place in the starting eleven, now becoming one of the first names on the teamsheet – with those at the Den crying for his loan move from Brighton & Hove Albion to be made permanent.
Premier League aspirations would’ve been largely scoffed at for the London club at the start of the season, but now it is certainly an achievable goal.The Lions trailed struggling Luton Town 1-0 at the break on New Year’s Day but fought back for a vital 3-1 win. Their approach in the second period was emphasised through Molumby, dropping short, seeking the ball, getting his team on the front foot – with positive, aggressive football.
The Sky Sports punditry team singled the 21-year-old out for praise, the latest in a string of performances driving his side up the table, showing maturity beyond his years.It’s not just for Millwall that Jayson has been garnering well-warranted attention and plaudits. Captaining the exciting and dynamic Ireland U-21 side, the former Railway star has been a leader in all senses, captivating with consistency that saw him named among the best players at the prestigious Toulon Tournament.
Stephen Kenny, his manager – has often sung his praises, and with the former Dundalk coach taking the senior reigns from Mick McCarthy in the aftermath of Euro 2020, there’s no doubting a maiden Irish cap is a question of when, rather than if.But that question surely must now be asked of Mick McCarthy, when? The answer is quite simple, Slovakia on March 26th. With Glenn Whelan released by Hearts and Ireland lacking in midfield dynamism since Wes Hoolahan’s retirement, Molumby holds all the cards to unlock what his country have been crying out for.
James McCarthy has returned to fitness with some solid showings for Crystal Palace, while Alan Browne of Cork consistently impresses at Preston North End. This trio could well provide the answer to Ireland’s midfield woes.With debuts having recently come for fellow Deise man Lee O’Connor, Troy Parrott, Brighton teammate Aaron Connolly and one for Adam Idah reportedly in the pipeline, it is hard to see how Molumby is yet to be capped, especially given how much senior football experience he has in comparison to his U-21 counterparts.
In recent interviews, the Waterford midfielder has remained tight-lipped, stating he won’t hold his breath on a call-up, but one thing is for certain, when it comes, this lad has proved time and time again as of late, that he is more than ready. When Ireland line out for a crucial clash in Bratislava, expect Jayson to be singing Amhran na bhFiann.