Jordan Norris Reports
Lee O’Connor has moved to Scottish Championship side Partick Thistle on loan for the rest of the 2019/20 season. The former Villa man, who made a deadline day move from Manchester United to Celtic, is yet to make a first-team appearance for the Scottish champions – with manager Neil Lennon sending the versatile defender out to gain some vital first-team experience with the aim of returning to stake a place in the Celtic XI.
English League One high-flyers Oxford United were also said to be battling for Lee’s signature, but he will remain in Scotland for the time being.2019 was a fantastic year for Lee, as he was a regular in the Ireland U-21 side that starred in the Toulon Tournament under the guidance of Stephen Kenny. 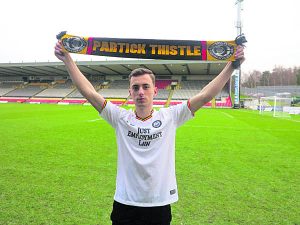 Lee O’Connor is on loan at Partick Thistle for the remainder of the season.

Lee also captained the Irish U-19 side which made it to the semi-finals of the European Championships, starring with club teammates Barry Coffey and Jonathan Afolabi. Afterwards, his big move to Celtic came – followed by a stunning week in November, where he made an assist in his senior Ireland debut versus New Zealand, before scoring an excellent goal against Sweden in a 4-1 victory that saw the U-21s go into 2020 topping a UEFA European Championship group containing the likes of Italy, Sweden and Iceland.
Wearing the no 21 shirt O’Connor made his debut for Partick Thistle in the 2-1 defeat away to Arbroath. The former Scottish Premier League are bottom of the Championship following Saturday’s defeat and have yet to win in 2020.
While according to many, the move may be a step below O’Connor’s current level – giving his education at Manchester United and consistent performances at underage level for Ireland, first-team football will be vital, no matter what the level.