Wicklow 2-11
Waterford 1-6
With just two rounds of this year’s National Football League played Waterford’s chances of getting out of Division Four and winning a place in the League Final at Croke Park are all but over after Benji Whelan’s side lost out to Wicklow at Aughrim on Sunday afternoon last.
The Waterford selectors gave a vote of confidence to the side which lost 1-10 to 0-10 against Limerick at Fraher Field eight days previously.
The hosts made three changes to the side that lost to Carlow in the opening round, the most telling of which was to bring the long serving Seanie Furlong into the starting line-up.
Wicklow proved difficult to break down in the opening half restricting Benji Whelan’s side to just two scores in those opening 35 plus minutes, but crucially for the side in white and blue one of those scores proved to be a three-pointer which gave the side confidence going into the second half. 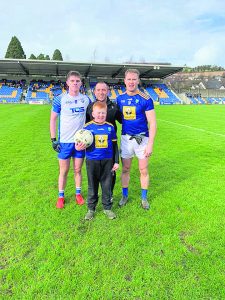 Seanie Furlong opened the scoring for Wicklow with a converted free and Dean Healy and Darren Hayden followed up to give Garden County a three-point lead. Jason Gleeson opened Waterford’s account which was followed by a well worked score by the impressive Seanie Furlong. Waterford levelled the match with the opening goal of the game on fourteen minutes when a mix up in what was proving to be a hard defence to break down allowed Darragh Corcoran to finish past Mark Jackson
That goal however failed to ignite the Waterford attack as that score for the Saint Saviour’s man proved to be the Déise’s last of the half.At the other end Wicklow proved to be more economical with the chances that they were creating. Goalkeeper Mark Jackson put over a ’45. Rory Finn looked as if he has going to hit the games second goal of the game but Waterford’s net minder Paudie Hunt made an excellent save deflecting the ball off his own upright and had it cleared from the danger zone.
Seanie Furlong pointed again for the home side after he was picked out by Darren Hayden to stretch their lead to two and they doubled that advantage by the break after Chris O’Brien found the range from a free and Seanie Furlong again pointed from a free after Dylan Guiry was sin binned for a foul on Oisin Manning. In between Dave Devereux hit the side netting when it looked as if a goal was on for Wicklow.
Trailing 0-8 to 1-1 at the break, Waterford opened the second half scoring with a converted Dermot Ryan mark, but with Waterford temporarily down to 14 players Eoin Darcy, having come on at the break, showed the home sides management team why maybe he should be in the side from the start as he pointed to put Wicklow 0-9 to 1-2 in front. And while Jason Curry and Dylan Guiry sent over a quick-fire double for the visitors Wicklow went five points up when a Seanie Furlong effort was saved but Darcy was on hand to follow up to give Wicklow a 1-9 to 1-4 lead.
Wicklow had their numbers cut after Jack Hamilton was black carded and Jason Curry put over the free but the Rathgormack’s man score was cancelled out on 55 minutes when Darren Hayden put over after some good work by Paddy O’Keane.Jason Curry from a free and Seanie Furlong swapped scores to keep the home side in front by five, but if Waterford had any hopes of getting something from this game, those chances ended when Eoin Darcy fed Chris O’Brien who netted a late goal for Wicklow as they recorded a tidy home win.