League of Ireland pre-season friendly
Waterford FC 1
Bray Wanderers 0
Waterford FC came out on top against Bray Wanderers in Saturday afternoon last in what was their third pre-season outing. Manager Alan Reynolds used a total of 18 players during the 90 minutes including new striker Matty Smith. Three trialists were included in that total as Reynolds continues to build his new look Waterford team. Tyreke Wilson, the new left-full back, watched the game from the stand. 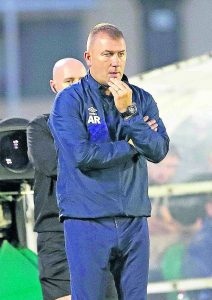 This match did not have the same endeavour as the game against Shamrock Rovers the previous Sunday but nevertheless there were some impressive performances from a number of Blues players. Kevin O’Connor’s wonderful free kick just before the interval proved good enough to defeat the Seagulls.The Blues created the first chance on five minutes when Robbie McCourt put in a fine cross to the back post, but there was no Waterford player there to get on the end of the ball.Will Fitzgerald set up Michael O’Connor in 17 minutes, but his shot was deflected over the crossbar.
It was a disappointing first half that lacked chances but the Blues produced the only goal of the game with the final chance of the half when Sam Bone was brought to ground just outside the penalty area by defender Darragh Gibbons and Kevin O’Connor beat Adam Hayden with a brilliant left-footed free kick that found the top right-hand corner of the net.
Blues boss Reynolds made three changes at the half time break with two trialists introduced.
Bray Wanderers introduced Conor Behan on 73 minutes and within seconds of coming on he missed a big chance when he took a pass from Paul Keegan in front of goal, but he somehow failed to convert past Paul Martin, who had replaced Tadhg Ryan.
Matty Smith, who joined the Blues from Dundee United, should have scored his first goal for his new club on 80 minutes when he raced onto a through ball from Dean Walsh, but he misfired when blazing side from ten yards.Gary Shaw couldn’t get on the end of a brilliant Dylan Barnett left-wing delivery three minutes later and then he failed to fire in front of goal when Glen Hollywood sent in a teasing cross from the right.
Kevin O’Connor’s first half free kick proved the difference at the final whistle and Waterford now head to Dublin to play Shamrock Rovers ‘B’ this evening (Tuesday) followed by another game in Youghal on Friday when they take on Cobh Ramblers (7.30pm).
The Blues get their 2020 campaign under way away to St Patrick’s Athletic on Friday, February 14th.