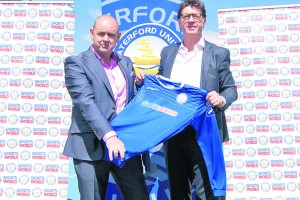 It would be fair to say that the past year has not been a vintage one both on and off the field. Waterford United never really got going in the First Division and at times it was impossible to keep track on what players were coming and going.
John O’Sullivan resigned from his position as chairman and then manager Roddy Collins departed before the campaign came to an end. Midway through the season it looked as if the club would not see out the remainder of the campaign and an emergency open meeting was held in The Woodlands Hotel where the General Manager Paul Cleary explained the dire financial situation the club found itself in.
The large attendance were shocked to learn that the famous Blues may have to fold but somehow the club did manage to keep going and eventually finished in fifth position.
In November there was almost mass hysteria when the chairman of Swindon Town, Lee Power bought the club and after many years of struggle and it would appear that at long last the local club can move forward without the worry of debts.
With a new Director of Football, Pat Fenlon and Head Coach Alan Reynolds at the helm, perhaps 2017 will see Waterford FC escape from the dreaded lower division.
It was not all bad news however as the Waterford United U17, team under the guidance of Gary Power and Derek O’Brien played some delightful football as they reached the latter stages of their league play-off positions.
Players such as Darryl Walsh, Eoin Wall, Sean Roche and Adam Conway sparkled all through the season and Wall and Roche broke into the first team.
All in all the future looks really bright for Waterford FC and who could have said that a short few months ago.
Football lovers were saddened to learn that one the most loved members of our football family, Milo Corcoran had lost his fight for life in August.
Milo served as President of the FAI and of course he was also a former member of the Waterford FC Supporters Club and chairman of the club.
Paul Walsh, the Hibernians stalwart died in June and the De La Salle clubman Eoin Burke left us in December and the former Johnville and St Saviour’s player Denny Keane passed away way to young in 2016 also.
There was joy for a club which were formed in 1972, namely Tramore Rangers. After 44 years of trying the club from ‘The Orchard’ eventually reached The Holy Grail of the Waterford Premier League following a prolonged battle with Ballinroad in Division 1A. There was great excitement at the idyllic venue and life-long members like Tom Power, Eddie Dunphy, Davy Purcell and Jamie O’Keeffe soaked up ever single minute of their long awaited promotion.
Carrick United took the Premier League crown back from Hibernians after losing the final game of the previous season to the city side.
It was sad to see Ireland’s oldest Junior League club, St Joseph’s lose their Premier status but just like the Blues the famous Saints will never die and they will rise again.
Bohemians celebrated their 75th anniversary by publishing a stunning book which charted the history of the club. Ritchie Elliott wrote and compiled 180 pages of beautiful memories. Take a bow Ritchie.
Yes it has been a bitter sweet year in many ways and we can now all look forward to a much happier and successful year in 2017.