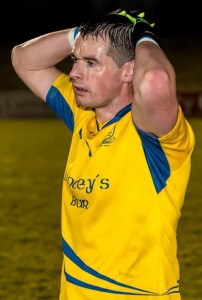 Munster Senior Club Football Final
Dr Crokes 3-15
The Nire 0-6
Dermot Keyes in Mallow
Ouch. This was akin to a punch in the guts, the air being let out of your tires and getting dumped on Debs night all in one rapid, unpleasant, stomach-churning sequence of unfortunate events.
This was not the happy ending Deise football aficionados had craved for the gold-clad men from the famed West Waterford valley where the big ball occupies local affection’s box seat.
And this was certainly not the year’s end that Benji Whelan’s charges deserved, having regained the Conway Cup they relinquished last season with such authority and élan.
But sadly, this particular Munster Senior Club Football Final was the type of one-sided encounter which those with early deadlines generally crave, with the vast majority of match reports heavily paragraphed by Kevin Murphy’s half-time whistle.
By the time the tea was being downed by the numbed fourth estate in Mallow, the goals had been scored. The damage had been done. The title had been secured. The Nire’s race had been run.

Still got it: Colm Cooper threaded together several excellent attacks for Dr Crokes at Mallow

But if there’s any consolation to be gleaned from so devastating a day for The Nire, it’s that they lost to a team which, on the basis of the first 25 minutes, could well go the distance, 25 years on from their sole All-Ireland Club title success.
The only major honour to elude the great Colm Cooper, a Croke Park mascot the last and only time Crokes went all the way, may well be within the Gooch’s grasp. But try telling Corofin that, the side now standing between Pat O’Shea’s men and a parade down Jones’s Road on Saint Patrick’s Day.
But if Crokes do get there, and given that Patrick’s Day next year falls on a Friday, mark your card and get to Dublin: right now it might even be the last time Cooper ever graces a stadium he has honoured for so long.
But let’s hope the great man gives it another year with a Kerry panel likely to be infused with fresh talent, and more than likely prove the team best equipped to break Dublin’s vice-like grip on a trophy Kerry regard as rightfully theirs. Anyway, back to Sunday, painful and all as it is to recall it even a few days later. 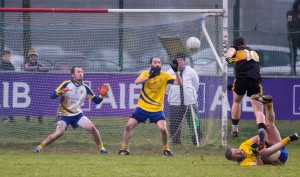 Despite some promising early play from The Nire, Benji Whelan’s men failed to convert some initial decent territory into scores on the board, with talisman Conor Gleeson suffering three early turnovers.
In contrast, the Kerry champions had no such problems – anything but – in front of a 3,055-strong gate, as their powerful wing backs Gavin White and David O’Leary charged forward with ominous intent.
Full-forward Kieran O’Leary, a thorn in the Nire side all afternoon long, set Dr Crokes on their way with a fourth minute point, added to three minutes later by Ambrose O’Donovan, whose tan also lived up to his father’s from his playing pomp three decades ago. 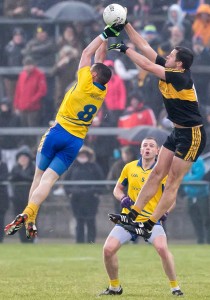 The Nire laboured under the high ball against the impressive Crokes

The first of three first half goals for the outstanding Daithí Casey arrived in the 10th minute, when he slotted home from point blank range after superb link play by Colm Cooper and Eoin Brosnan.
Casey was next to score via a 13th minute free, with Brian Looney and Kieran O’Leary tagging on further points over the next four minutes, as a bedraggled Nire defence was pulled one way and then the other.
Just shy of the 20th minute, things went from bad to worse for The Nire after Shane Ryan was adjudged to have impeded the waspish O’Leary, an indiscretion not initially leading to outstretched arms from Kevin Murphy.
But after significant protestation towards an umpire by Colm Cooper, the Cork referee signalled a penalty kick, which Casey deliciously finished, to the right of the diving Tom Wall. Game over, in reality, and by then it was a case of bailing water off the submerged deck as far as The Nire was concerned, as Tom Wall’s kick-outs were repeatedly broken down and claimed by either Ambrose O’Donovan or skipper Johnny Buckley. 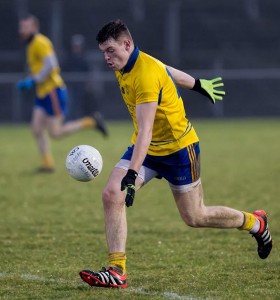 O’Leary landed another point before Dermot Ryan, who ended the evening with four points, finally got The Nire off the mark nine minutes from the break.
But Crokes came back with the score of the game from their next attack, when Daithí Casey brilliantly completed his hat-trick, rounding off another sweeping move, sending the ball into the top left-hand corner of the hapless Wall’s net.
And while it was painful to watch from a Nire perspective, it was impossible not to be impressed by the application of the Crokes’ men. Such a display would certainly have seen off at least 20 to 22 inter-county line-ups. No question.
Johnny Buckley, Colm Cooper and Daithí Casey completed Dr Crokes’ first half scoring, and they went in leading by 3-9 to 0-1 at the break. The Nire departed the fray, surely wishing they could board the bus there and then and crawl under a big blanket.
Both sides emptied their benches during the second half, with young Crokes substitutes Jordan Kiely and Chris Brady illustrating their potential via some excellent point scoring.
Dermot Ryan certainly led by example for The Nire, while Liam Lawlor emptied the tank, as the Waterford champions at long last found some shooting form during the second period.
But a blow by blow analysis of the second half is hardly required given how much damage was inflicted during the opening half hour by a dominant Crokes side.
Their season continues and they now carry the provincial standard into the All-Ireland Series, one in which I certainly hope they prove victorious come March 17th next. 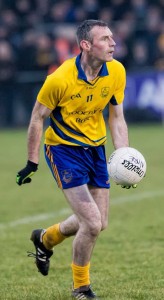 Try as Brian Wall and co undoubtedly did on Sunday last, The Nire were outclassed by the Kerry champions

While there’s never any shame in losing to so talented and supremely coached a side as Dr Crokes, the reality is that The Nire never got out of the blocks the way they needed to, and were never going to challenge on the basis of just two players largely delivering.
Jamie Barron’s 37th minute Black Carding encapsulated a trying afternoon for The Nire, who headed home that evening cognisant that they had not done themselves justice.
And whether those within the group with heavier mileage possess the willingness to commit to another tough pre-season ahead of the 2017 campaign probably won’t be adequately gauged over the coming weeks.
Yet this is an altogether different type of defeat from two years ago to Austin Stacks, and the lack of gallantry in last Sunday’s reversal when contrasted to 2014 might persuade a few of the older players to give it one more go next year. But time alone will tell on that front.
Dr Crokes: Shane Murphy; John Payne, Michael Moloney, Fionn Fitzgerald; Gavin White, Alan O’Sullivan, David O’Leary; Ambrose O’Donovan, Johnny Buckley; Daithi Casey, Gavin O’Shea, Brian Looney; Colm Cooper, Kieran O’Leary, Eoin Brosnan.
Substitutes: Micheál Burns for Ambrose O’Donovan (44 mins), Jordan Kiely for Daithí Casey (48), Tony Brosnan for Gavin O’Shea (51), Luke Quinn for John Payne (51), Chris Brady for Brian Looney (54) and PJ Lawlor for Alan O’Sullivan (56)
Scorers: Daithí Casey (3-1; 1-0 pen, 0-1f), Kieran O’Leary (0-4), Brian Looney (0-2), Colm Cooper (0-2; 0-1f), Ambrose O’Donovan, Johnny Buckley, Eoin Brosnan, Jordan Kiely and Chris Brady (0-1 each) and Shane Murphy (0-1 45).
The Nire: Tom Wall; Justin Walsh, Thomas O’Gorman, Dermot Ryan; James McGrath, Martin Walsh, Jamie Barron; Shane Walsh, Dylan Guiry; Seamus Lawlor, Brian Wall, Shane Ryan; Liam Lawlor, Darren Guiry, Conor Gleeson
Substitutes: Jake Mulcahy for Justin Walsh (HT), Craig Guiry for Darren Guiry (HT), Conal Mulcahy for Jamie Barron (Black Card, 37 mins), Keith Guiry for Brian Wall (54) and Kenny Brazil for Liam Lawlor (59).
Scorers: Dermot Ryan (0-4) and Liam Lawlor (0-2).
Referee: Kevin Murphy (Cork)
Dermot Keyes
Benji Whelan was the last Nireman off the Mallow paddock, having done his best to rally the troops after an afternoon the collective will wish to wipe from their memory with haste.
It was one of those days.
“We knew it was going to be a mammoth task, and we’re trying to keep things as upbeat as possible coming in there, but the movement (Crokes) showed there today was just hard to stay with,” said the Nire boss in the wake of their 18-point reversal.
“Reflecting on it now, we were down a couple of bodies too and that probably cost us too on the day, but you couldn’t take it away from Crokes; they opened the gate in the first 10 minutes and there was no closing it after that.”
Benji said that the build-up to Sunday’s Final had been “perfect,” adding: “you’re taking on a different animal, they’re operating on a higher level and it’s very hard to come up to that level on a once-off basis when you haven’t been exposed to it before.
“And with all due respect to Carbery Rangers, they didn’t have their best forward that day, and maybe if we had been tested in that way, maybe the game would have went differently, maybe we would have come through, maybe we would have had a lot more experience about what was coming to us, but look, they cleaned out a couple of our lads, unfortunately, they opened up spaced and they really killed us when they got that ball into space in the inside line.”
Benji Whelan continued: “I feel gutted for the boys. They did everything we asked of them all the way through. The preparation was fantastic but this is just one of these things that happen and we have to lift ourselves up and get on with it…
“I’m not going to give any excuses as there are no excuses. We were there two years ago and we played in Páirc Uí Chaoimh and acquitted ourselves quite well, I thought, for a good portion of the game. I just felt that these fellas were too good for us on the day and it’s as simple as that. It would have taken a great team to stay with them. I’ve watched a lot of National League games in Division Three, even in Division Two and they’re operating at that level today. We’re not, and that’s the simple fact of the matter.”
The Nire manager saluted the individual contribution made by Dermot Ryan, stating: “Sometimes it takes big days for big men to stand up and he was fantastic today. Now, a lot of the lads worked themselves to the bone…and I’d have no qualms about that, but in fairness to Dermot, he took the game to them, whenever he got a chance and he ended up with four points so The Nire has unearthed something there, so that’s a positive, and we have to try and find a few…it’s still been a very good year.
“I said to them at half-time that, regardless of the score, that we were here on merit and that we deserved to be here and that we had to keep plugging away, keep playing our ball, play for the bit of pride that’s left to be played for and I think they did that in the second half.”
The players in turn should take pride in being managed by such an upbeat, bright and proud football man, and I’ve no doubt we’ll be hearing a great deal more from Benji Whelan in the coming years.