Euro Under 21 Group One
Republic of Ireland 4
Sweden 1

Second-half goals from Lee O’Connor, Adam Idah, Troy Parrott and Zack Elbouzedi saw Stephen Kenny’s side secure an important three points to see the side top of Group One on 16 points; a record points total for an Ireland U-21 team in The Tallaght Stadium on Tuesday night last. Waterford born Lee O’Connor, who had made his debut for the senior Irish team the previous Thursday against New Zealand, scored a magnificent equalising goal to start the revival as Sweden led one nil at the interval. 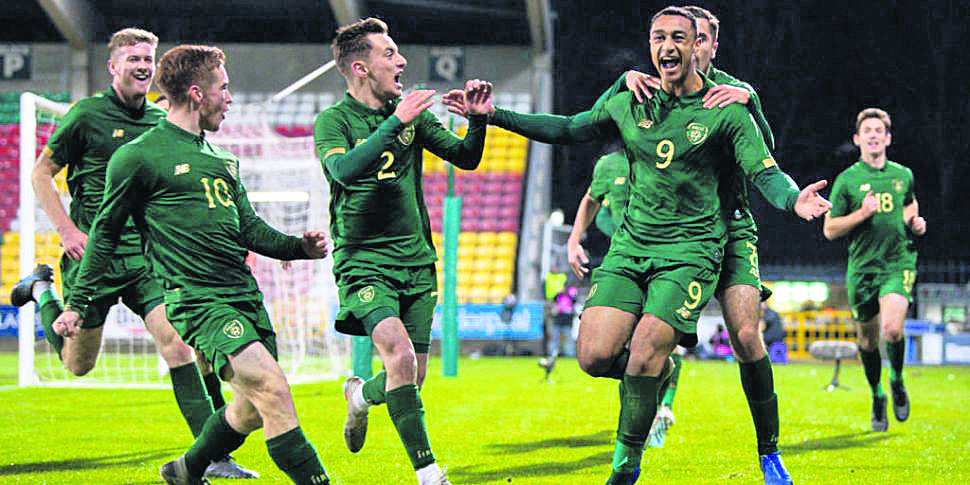 Zack Elbouzedi, who was a major player with Waterford FC in 2019, captained the side and he turned in a blistering second half display and capped off his performance with the fourth Irish goal. Jayson Molumby from Cappoquin also played a role in this superb victory. The Brighton player, who is on loan at Millwall, displayed once again why he has a glittering career ahead of him. Unbelievably this was Lee O’Connor’s 15th cap across three age groups during 2019. It’s a record that will take some beating. Having said that it’s a record that will possibly stand forever. Zack Elbouzedi of course scored the winning goal for the team when they defeated Armenia the previous week so it has been and amazing period for him and Lee O’Connor and of course Jayson Molumby.
In truth, Ireland struggled through the first 45 minutes and found themselves behind in the 18th minute. Viktor Gyökeres took the ball down on the left and turned inside to find the bottom corner with a sublime finish, the first goal Ireland conceded at home during this campaign. The home side only mustered one chance of note before the break. Gavin Bazunu’s clearance found Parrott on the left and after he glided past Anel Ahmedhodzic, his cross found Idah but the shot found the side netting.
Kenny made a double substitution at the break as Liam Scales and Connor Ronan were introduced. It sparked Ireland into life and four minutes into the second-half, they were level. Idah found space on the right and his cross found the onrushing Lee O’Connor to sweep the ball home. Ireland continued their dominance as Elbouzedi’s cross almost found Idah in the 60th minute, but he couldn’t quite reach the ball. Four minutes later, the Norwich City man had his goal. Once again, Elbouzedi’s wing-play produced the goods as his low cross was powered home by Idah from 12 yards out.
Ireland showed no signs of stopping the second-half rout and next, Parrott got in on the act. In the 74th minute, Ronan capped an incredible game-changing performance with a fantastic lofted-ball to find Parrott and he found the bottom corner from the edge of the area.Three minutes from time, Ireland scored their final goal of the game as Elbouzedi scored the goal his industrious play deserved. Ronan drifted down the left and crossed across the six-yard box to hand Elbouzedi a simple tap-in to seal the victory. “It was an incredible second-half performance and the team deserves a huge amount of credit,” said U-21 boss Stephen Kenny. “The way we responded after the break was fantastic to see and I’m delighted the players got their reward for fantastic team performance. It was a fantastic camp with six points across the two games.”