Ballygunner downed by Shamrocks in Semple
Brian Flannery Reports
Throughout history, many great campaigns ended in defeat after literally getting stuck in the mud. Napoleon Bonaparte and indeed Hitler witnessed disaster as their respective armies suffered in the harshness of a Russian winter with their armoury buried in muddy tracks.And so too Ballygunner’s campaign to win a maiden All-Ireland Club title came undone in the mud around the parallelogram at Semple Stadium. With the sides level at nine points and with 40 minutes on the clock, Conor Power zipped along the end line at the Town End. 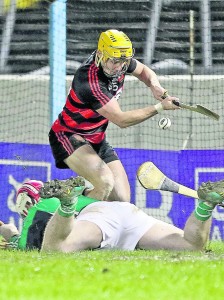 However his goal-bound flick got stuck in the mud with Tim O’Sullivan’s follow-up also stalling on the treacle-like surface in front of the Ballyhale goal. O’Sullivan was then unceremoniously upended the danger was cleared as the Shamrocks survived a major scare.
Just four minutes later, St Kieran’s schoolboy Eoin Cody raced through the heart of the Ballygunner defence to finish to the net off from close range to send his side 1-10 to 0-10 clear. Although there was some 15 minutes yet to play you sensed the seminal moment had already arrived. And so it proved.Ballyhale outscored the Waterford and Munster champions 0-5 to 0-3 over the final quarter to send the Henry Shefflin-managed club into a record eighth All-Ireland Club Final.
The Gunners never really threatened the winners’ goal over the remaining minutes and thus never looked like scoring the goal they needed to get back into contention.The most stark post game statistic was Ballyhale outscoring Ballygunner by 1-12 to 0-3 from play with all bar three of Ballygunner’s 13 points came from Pauric Mahony placed balls. Sure pressure frequently resulted in the awarding of frees which Mahony mercilessly converted but such a minimal return from play rarely results in victory at the highest level. You could argue too that winter hurling doesn’t quite suit the silken skills of a fast paced precision passing team like the one Fergal Hartley has built. But such is the reality of All-Ireland Club Hurling. The conditions were the same for both sides.
The two man full-forward line and passing game preferred by the Red and Black is also better to defend a lead as opposed to chasing it.
Irish Rugby coach Joe Schmidt was critiqued by pundits who clambered for a ‘Plan B’ approach following defeat to England and I suspect the Ballygunner boss may well have similar thoughts for such musing in the coming weeks. The physical presence of Barry O’Sullivan may well have been better utilised from the throw-in while the loss of Eddie Hayden at half-time through injury had a greater than anticipated effect on the solidity of the Gunners rear-guard.
Regrets, there may be a few, but sometimes you just lose to a better team.