Pluck of the Draw

The fourth of four additional minutes at the rebranded Joule Park in a gusty Aughrim. Wicklow’s Gearóid Murphy stood over a free earned by the talismanic Seanie Furlong after an audacious piece of fielding by the homesters’ captain had drawn the set piece.
Directly in front of goal, with time virtually up, those manning the official Wicklow GAA Twitter page were awaiting their latest rib-tickling post.
Deise manager Tom McGlinchey, who’d spoken about how welcome the rub of the green would prove this campaign around, stood on the line, surely resigned to another heart-breaking reversal. Backroom colleague Frankie Ryan wasn’t so sure; he felt the young Murphy, just a year out of minor, cut an uneasy jib as he strode back from the ball.
And how right Frankie was, as Murphy struck a free wide from the sort of comparable range that Bernhard Langer stood over when attempting to retain the Ryder Cup at Kiawah Island 27 years ago. Wide ball. Full-time. Twelve points apiece at the end of a welcomingly entertaining encounter, a result that will make training a whole lot more enjoyable for the Deisemen between now and the arrival of Antrim to Fraher Field on Sunday next (2pm). 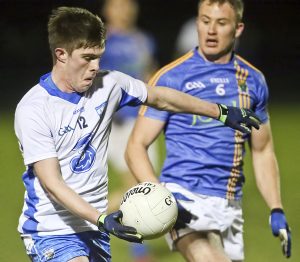 Conor Murray proved particularly prominent during the first half of Sunday's NFL meeting with Wicklow in Aughrim. | Photos: Sean Byrne

Playing with the aid of a gale even Fraher Field at its gustiest would struggle to match, Waterford began much the brighter, and led by 0-4 to 0-1 after 13 minutes. Rathgormack’s Jason Curry, assuming free-taking duties from captain Paul Whyte, opened the scoring after just 66 seconds, with Wicklow skipper Seanie Furlong levelling matters with a fourth minute free.
Whyte then opened his account in the ninth minute following fine approach play from his Kilrossanty club mate Joey Veale, before the energetic Veale pointed himself barely a minute later.
Curry converted a 13th minute 45 for Waterford but from that juncture on, the half belonged to Wicklow, now under the managership of John Evans, with Darren Hayden and Daniel Keane catching the eye in attack, while Conor Healy roamed with intent from left half-back.
Daniel Keane landed Wicklow’s second point on the quarter hour, before Seanie Furlong turned over his second free in the 22nd minute.
Six minutes later, Paul Whyte stemmed the flow somewhat when impressively registering his second point from play, but points from Gearoid Murphy (a free) and the score of the half from Furlong ensured parity at the interval. And given the strength of the wind that Wicklow would resume with after the break, it was difficult to foresee anything other than a home win.
The opening exchanges of the second half did little to improve the move of the small but dedicated Deise following who made the trip to Aughrim, including Sean ‘The Rock’ Cullinane. 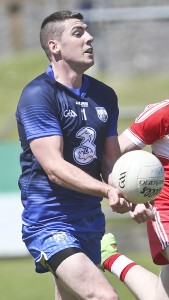 Darren Hayden kicked Wicklow ahead within 18 seconds of the restart, with Gearoid Murphy tagging on another free in the 40th minute. Furlong and Murphy landed frees in what felt like moments apart during the 42/43-minute mark, but a marauding run and point by James McGrath left Waterford just a goal down from the Deise’s next attack.
But Wicklow remained in the ascendant thanks to a fine Dean Healy point just shy of the three-quarter mark, to leave them four points clear. Tom McGlinchey then introduced Donie Breathnach and Feargal O’Currain, and within seven minutes, greater pressing in the Wicklow ‘red zone’ yielded three Jason Curry conversions, on top of a superbly flighted point from the Rathgormack corner-forward, to the audible delight of the Deise sideline.
Dylan Guiry, who’d played Curry in for that 53rd minute point, repeated the trick a minute later when releasing Joey Veale, who kicked Waterford ahead for the first time in 22 minutes (0-11 to 0-10).
And for a team whose collective training commenced somewhat later this season, the manner in which Waterford finished this contest speaks volumes for not only Peter Kirwan’s training acumen but the individual commitment of each panellist. Curry put too much fade on a 55th minute free (his only wide of the day), a miss compounded by a terrifically flighted point by Gearoid Murphy which drew the sides level with 13 minutes remaining.
A further five minutes passed before the ever-impressive Seanie Furlong steered another free between Stephen Enright’s uprights to edge the hosts ahead, and a momentum shift towards Wicklow was palpable after JJ Hutchinson was black carded in the 65th minute, just three minutes after his introduction.
Jason Curry landed his fifth free of the afternoon with just a minute of normal time remaining to make it 12 points apiece, following a match in which referee Seamus Mulhare proved overly familiar with his whistle.
And when the fourth official signalled four additional minutes, one hoped for some long overdue good fortune from a Deise perspective. And it duly arrived when Gearoid Murphy steered a free wide from a position he might never miss from again for all the inter-county years that lie ahead of him. Antrim will travel to Dungarvan buoyed by their 10-point win over Leitrim. But Waterford will feel similarly buoyed having pulled off an incredibly satisfying draw on the road.