Deise in Slow Rise from the Blocks

Two second half goals from the outstanding David Dunne were crucial in helping Wexford secure the two points on their return to Division 1A of the National Hurling League.
Waterford, who only recently returned from their team holiday, featured nine of the side that started the All-Ireland Final last September but proved second best for the majority of the 70 plus minutes.
The game had to be delayed by 10 minutes to allow all the official attendance of 7,467 to gain entry to Walsh Park before the throw-in.
When the game did start, it was Wexford who took full advantage of the breeze advantage in the opening half. 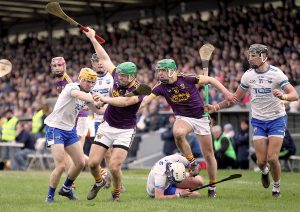 Waterford Captain Kevin Moran had won the toss but opted to play into the wind blowing towards the town end. Seven points in succession from goalkeeper Mark Fanning (three frees), Lee Chin (two frees), Paudie Foley and Kevin Foley gave the Walsh Cup winners an early advantage.
It was the 20th minute before Jake Dillon finally opened the scoring for the home side as the greater work-rate from the visitors was telling as Waterford struggled to gain and retain possession.
Aidan Nolan, Diarmuid O’Keeffe (twice) and Lee Chin all hit points from distance rather than attempting to unlock a packed Waterford defence where Tadhg de Búrca occupied his usual sweeping position.
Pauric Mahony had five first half points, all from placed balls with Wexford leading by double scores, (0-12 to 0-6) at half-time.

An early free from Lee Chin pushed Wexford’s lead out to seven but the home side was beginning to work their way into the game.
Former hurler of the year Austin Gleeson, who started the game at centre-back was switched to the forward division but found it difficult to influence the game.
Four points on the trot including a monster score from the Déise’s most impressive performer, Tadhg de Búrca, cut the deficit to just three points (0-13 to 0-10) with just eight minutes of the second half elapsed. W
ith a strong breeze behind their backs the All-Ireland finalists now looked best placed to go on to win the game however the men from the Model County had other ideas. 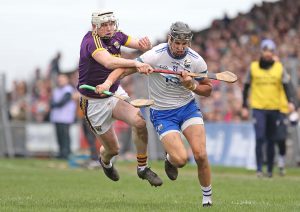 After 43 minutes full-forward David Dunne out jumped both Conor Gleeson and Barry Coughlan to win possession before racing through and batting the ball past a helpless Ian O’Regan (1-13 to 0-10). Jamie Barron cut a beautiful line-ball over the bar in response moments later but Wexford was re-energised by Dunne’s green flagger.
Lee Chin converted two more frees with another Mahony point in reply keeping the margin at six points. Paul Morris and Lee Chin with one of the scores of the game both pointed to rouse the large Wexford contingent in the stand, making it 1-17 to 0-12 with 54 minutes on the clock.
Pauric Mahony bisected the posts again to reduce the margin to seven but the Davy Fitzgerald managed side was not going to be denied.

David Dunne pointed when well placed and in the 58th minute after a slick hand-pass from Conor McDonald, Dunne was once again in on goal with his powerful shot this time deflected into the net off the stick of Ian O’Regan (2-18 to 0-13) leaving Wexford were out of sight.
Talisman Pauric Mahony hit four late points before the end with teammates Darragh Fives and Austin Gleeson also registering white flaggers.
Waterford, sluggish all afternoon, needed goals but a 30-metre effort from Gleeson, which hit the post was as near as the home side came.
Wexford’s defence, with Damien Reck and Matthew O’Hanlon in top form, held firm with late points from Lee Chin and man of the match David Dunne confirming an opening round League victory.
Interestingly, Waterford manager Derek McGrath did not introduce a single substitute throughout the entire 70 minutes.