MANY hurling fans have slated Walsh Park’s suitability for staging large games following Sunday’s fixture between Waterford and Wexford.
The Slaneysiders got the better of the Déise in their Division 1A Allianz Hurling League clash which was attended by 7,467 spectators.
However, the inadequate facilities at Walsh Park proved to be one of the main talking points amongst fans from both counties – with toilets and facilities for disabled people being heavily criticised.
Spectator Pat Walsh took to social media to vent his frustration. 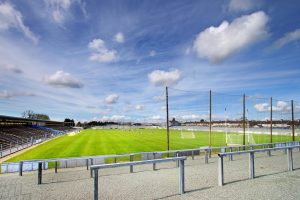 He tweeted a picture he had taken from the designated wheelchair viewing area, pointing out that he was located below the level of the pitch and that fans in the Stand had to walk by in order to access their seats.
Mr Walsh also expressed his disappointment that he was located on the end line with a fence situated directly in front of his eye line.
Many people who were in attendance at Sunday’s game supported Mr Walsh’s comments and also expressed outrage at the overall facilities in Walsh Park.
Martin Power, who was sat directly behind Mr Walsh, said “it was shocking”.
“With the amount of kids at the game (which is a good thing) walking up and down in groups of five and ten, the people sitting there couldn’t see a thing!” he said. 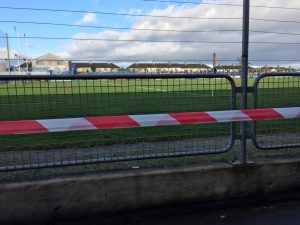 Donal Fitzgerald said it was “totally embarrassing that any spectator should have to put up with these facilities”.
“Walsh Park is well and truly past its sell by date,” he said.
“If Cork can get state funding for Páirc Uí Chaoimh, then surely Waterford deserves equal opportunity and support to fix this problem?”
Mick Flynn said he was sitting in the front row next to wheelchair users and had an “absolutely brutal view.”
He said there is now a “big opportunity” for a state-of-the-art venue when redevelopment takes place after the 2018 Championship.
“Waterford supporters deserve so much better,” he said.
Commenting on Mr Walsh’s photo, retired Morning Ireland presenter Cathal MacCoille said it looked “awful”.
“Action needed obviously, and an obvious question arising: was anyone who uses a wheelchair consulted before this space was allocated?”