Waterford Reel Off Victory No 2

An impressive first half display by a strong looking Waterford team set up victory at the RSC on Friday night last. Good performances by Gavan Holohan, Derek Daly, Rory Feely, David Webster and Izzy Akinade and also by the free flowing Bastien Hery proved too much for the visitors and there were positive signs that the squad is coming together nicely.
During the interval another new signing was introduced to the large attendance. Stanley Aborah, a 30-year old midfielder who has played for Portsmouth and Notts County is the latest recruit to the ranks.
Owen Wall caused a couple of problems for his former club during the early exchanges and had an opportunity to open the scoring on five minutes but he fired his shot across the face of the goal.
The Blues broke the deadlock on nine minutes. Paul Keegan sent over a corner kick to the near post that found Patrick McClean and when his shot came back off the post, Gavan Holohan was on hand to fire the close-range rebound to the net.
Waterford grabbed their second goal of the contest on 24 minutes when Izzy Akinade rose highest in the penalty area to head a loose ball past visiting keeper Danny Bolger.
Sander Puri had a great chance to add a third goal for the hosts on the stroke of half-time when he got free at the back post to meet a cross from Derek Daly but Wexford keeper Danny Bolger tipped the ball over the bar. 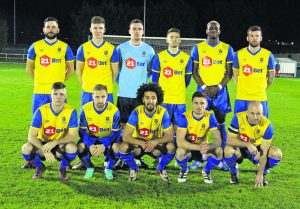 : The Waterford team that took on Wexford at the RSC on Friday night last.

The Blues scored their third goal from the resulting corner kick. Keegan’s delivery was touched on by Bastien Héry at the near post and a second deflection took the ball past Danny Bolger.
Wexford got themselves a goal on 56 minutes when Shane Barnes played the ball behind the Blues defence to Aaron Dobbs who outpaced Patrick McClean and slipped a right-footed shot to the far corner, past an advancing Niall Corbet.
Gavan Holohan restored the three-goal advantage for Waterford on the hour mark when he beat keeper Colum Feeney from the edge of the penalty area.
Dean Walsh could have added a fifth goal for the home side within a minute of his introduction when he raced onto a through ball from Darryl Walsh but he shot first time straight at Wexford keeper Feeney.
WATERFORD FC: Niall Corbet (Matthew Connor ’73), Rory Feely (John Kavanagh ’59), Patrick McClean (Trialist C ’68), David Webster (Justin Croke ’78), Trialist A (Trialist B ’68), Paul Keegan (Darryl Walsh ’59), Bastien Héry (Shane Griffin ’68), Gavan Holohan (Sean Roche ’78), Sander Puri (Dean O’Halloran ’59), Derek Daly (Dean Walsh ’59), Izzy Akinade (John Martin ’68)