Bohemians were crowned U16 A Cup champions in Graun Park on Wednesday evening last. The searing heat did not affect their display and from the opening whistle they were well and truly focused on the task at hand. Bohs had defeated Carrick twice in the league campaign and it would be fair to say that the Ben Wadding Park outfit justified their favourites tag. Carrick United gave their all during the 80 minutes but at the end of the day they had to bend the knee to this talented Bohemians squad. The team managed and coached by Gary Coad and Nigel Ray took up the running from the opening whistle and took the lead after eleven minutes. Jack Power played a wonderful ball through to Conor Walshe who struck the ball on the run from just inside the right side of the penalty area. The ball came crashing back off the far upright but Harry Nolan, following through, fired to the net from inside the six yards box. Ten minutes later Ravelli Kilonda played a sublime ball to Conor Walshe who let fly from 30 yards but the ball went inches over Taylor Hanlon’s crossbar. Bohemians doubled their advantage on the half hour mark. Ravelli Kilonda and Jack Power combined to get the ball into the danger zone and when the Carrick defenders failed to clear Harry Nolan took full advantage and cracked home his second goal of the contest inside a crowded 18 yards box. 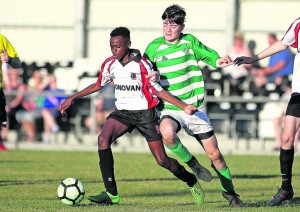 Just before the change of ends Nolan almost completed his hat-trick when he raced to the back post to meet a left wing cross from Conor Walshe but on this occasion he shot into the side netting.
Moments later Eoin O’Brien was just inches wide with a low strike from 25 yards. Carrick were grateful for the half-time break as it gave them an opportunity to reorganise their game plan.
Bohemians were also happy to get back into the cool of the dressing room because the sun continued to blaze down and the temperature appeared to rise during the match.
Twelve minutes into the second period Carrick were unlucky not to pull a goal back. Sean Daly got his head to a left wing cross from Tim Treacy and the ball looked destined for the net but, with the Bohemians goalkeeper Gavin Buckley beaten, defender Zach Power was well placed to head the ball off the goal line. 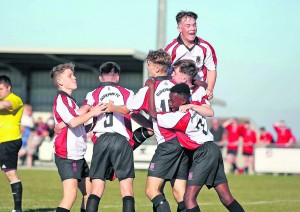 Ravelli Kilonda cracked in a brilliant free kick from 25 yards on 58 minutes and the ball looked odds on to finish up in the roof of the net but Taylor Hanlon did brilliantly to tip the ball over his crossbar.
Bohemians continued to dominate proceedings and they put the icing on the cake on 77 minutes when Conor Walshe raced on to a long ball from Ravelli Kilonda and slipped the ball past the advancing Taylor Hanlon.Waterford FC goalkeeper Matthew Connor presented the Waterford FC Cup to Bohemians captain Jack Power in the presence Pat Kelly, David Cullen and Mary Ray of the Waterford Schoolboy League.