League of Ireland Premier Division
Sligo Rovers 2 Waterford FC 3
Waterford FC moved seven points clear of fourth placed Shamrock Rovers as they continued their march towards European football in 2019 with a thrilling 3-2 win over Sligo Rovers at the Showgrounds on Saturday last. This was the second time this season that the Blues defeated ‘The Bit 0 Red’ by a single goal at the venue underneath Ben Bulben.
All of the goals arrived in what was a hectic first half as Waterford notched up their 13th win of the season while Sligo succumbed to their 12th defeat.
Waterford started on the front foot against a rather sleepy home side and took the lead after just four minutes.
Jack Keaney was adjudged to have fouled Courtney Duffus 20 yards from goal and Stanley Aborah, who was returning from a four match suspension, sweetly struck the subsequent fee kick to the top corner of Mitchell Beeney’s net. 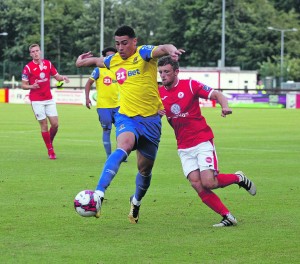 Blues striker Courtney Duffus on the attack against Sligo. Waterford FC last week announced that the striker, who is on loan from Oldham Athletic, would stay with the Blues for the rest of the season.

The home side didn’t fashion their first chance until the 16th minute. Greg Moorhouse pushed John Mahon’s long ball into the path of Caolan McAleer who forced a fine save from the Blues goalkeeper Matthew Connor. Waterford doubled their advantage three minutes later.Izzy Akinade knocked David Webster’s free kick from the half-way line into the path of John Martin who easily turned and fired into the opposite corner of the net. The hosts eventually woke from their slumber and halved the deficit just short of the half hour mark. David Cawley’s sublime through ball found the oncoming Adam Wixted who took one touch to steady himself and fired past Matthew Connor from an acute angle. Incredibly Get Lyttle’s charges found themselves back on level terms just two minutes later when Seamus Sharkey headed home Donelon’s corner kick. Rovers joy didn’t last long however as Waterford found themselves back in the lead on 33 minutes.
Lewis Morrison was the guilty party as he allowed Bastien Hery to take control of the ball on the edge of the penalty area and the Frenchman drilled the ball past the diving Mitchel Beeney.
Sligo tried their best to level proceedings in the second half. Greg Moorhouse found the side netting and then Keaney brought an excellent save from Matthew Connor on 64 minutes with a sweet volley. Rovers had Mitchell Beeney to thank for keeping them in touch on 71 minutes when he got down quickly to guide Izzy Akinade’s header around his left upright.
Following that incident the home side enjoyed a lot of possession but the Waterford defence were not to be breached for a third time and three valuable points were secured by Alan Reynolds men.