Tramore golfer Robin Dawson is set to lead the six-man Irish side at the European Amateur Team Championships which begin today (Tuesday) and conclude on Saturday next at Golf Club Bad Saarow (Faldo Course), Germany.
Dawson, the only survivor from last year’s team, along with Alex Gleeson (Castle GC) earned automatic selection on the team by virtue of being the top two ranked Irish players in the World Amateur Golf Rankings. Dawson broke into the top 10 last week while Gleeson is 109th.
The Golfing Union of Ireland introduced selection criteria for the men’s senior teams at the start of 2018 as part of the Union’s strategy to be more open and transparent in its operations while the GUI’s High Performance programme is supported by Sport Ireland and Sport NI.
Dawson and Gleeson will be joined by Caolan Rafferty (Dundalk), Rowan Lester (Hermitage) and new caps John Murphy (Kinsale) and Jonathan Yates (Naas). 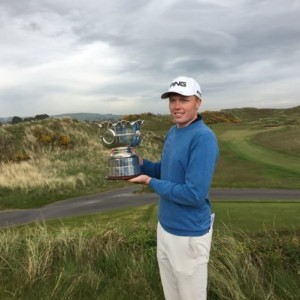 Ireland have won this competition six times previously: 1965, 1967, 1983, 1987, 2007 and 2008. Rory McIlroy and Shane Lowry played on the winning team at Scotland in ’07 and Lowry played again, at Italy in ’08.
Dawson’s rise up the World Amateur Rankings this year has been nothing short of spectacular. From World no 98 in March he has progressed to no 10, thanks to some sparkling performances at elite events over the past few weeks.
Dawson began the year with a tie for 12th at the Campeonato Sudamerican Amateur in Argentina in mid-January and followed up with a tie for 26th at the South Africa Strokeplay Championship on February 9th. A week later he tied for 20th at the African Amateur Stroke Play Championship and the globe-trotting continued in March when he played with the European team at the Bonallack Trophy in Doha, Qatar.
A fifth place at the West of Ireland Amateur Open at Sligo GC was followed with a somewhat disappointing tie for 46th at the European Nations Cup in Sotogrande, Spain and a tie for 27th at the Lytham Trophy.
However the result that Dawson had been striving for finally materialised when he won the Irish Open Amateur Championship at Royal County on May 20th.
Although he finished well down the field at his next tournament, the Internationaux de France at Chantilly Golf Club, and endured his first missed cut of the year at the St Andrews Links Trophy, Dawson posted the two results that saw him ascend to the lofty position of World No 10.
He reached the final of the R&A Amateur Open at Royal Aberdeen on June 23rd but lost the 36 hole match-play final to South Africa’s Jovan Rebula.
Despite the final defeat Dawson’s World Ranking rose from 35th to 13th and was further improved to 10th just last week when he carded an excellent closing round of 68 to finish in a tie for second at the European Amateur Championship in the Netherlands.
On the back of those fine performances Dawson should certainly be full of confidence as he leads Ireland into action in Germany this week.