Home » Sports » Soccer » Reynolds Pleased with Another Away Success

Reynolds Pleased with Another Away Success

Waterford FC manager Alan Reynolds was delighted with last Friday night’s result be was honest enough to admit it was far from a vintage display by his side.
“Yeah, delighted with the result,” he began. “We came here to get a positive result and we have done that. It was not out best performance of the season but we achieved what we came here to do. We will take it and move on. We went direct tonight because we knew there would be a lot of bodies in the middle of the park and that was the reason we adopted that style of play. We got off to a great start when Bastien scored. He’s a quality player and just like all quality players he chips in with big goals when we need them.” He continued: “I thought Drogheda were very good and they put us under pressure in the second half but we were strong in defence and Niall Corbett did not have a have to make a save. We looked like a team who have been around the block and our experience told. It was not a good performance but it was a great result and we will now move on and prepare for another tough game in the league next week against St Patrick’s Athletic. Courtney Duffus will be back next week but Stanley Aborah will be out for another couple of weeks with a knee injury.” 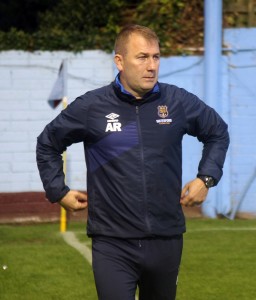 Meanwhile, Drogheda boss Tim Clancy said he was outraged by the attitude of the match officials when he spoke after the game. “I am not disappointed because I thought we played very well against a very good team who have great players. They are a full-time team and I thought we competed well against them. We created a few good chances and Mark Doyle had a good chance in the second half. We gave a good account of ourselves and we restricted them to one shot and they scored from that shot. It took a wicked bounce in front of Paul Skinner but that’s football.”
Tim Clancy added: “We did really well overall. It’s all very frustrating because we were mounting pressure neat the end and they had player down for a minute at least and they were walking up to every set piece and they were also three substations and they add on just three minutes. How they came up with that is beyond me. 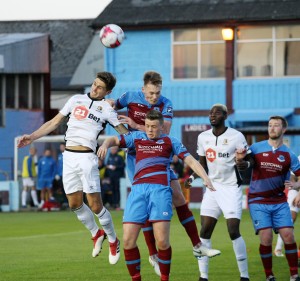 They are First Division referee’s and I am not blaming them for us losing tonight but it is something that needs to be looked at in this country. the standard of referee’s in the First Division .They are very arrogant people, very very arrogant people and you are not allowed speak to them. You talk to them on the bench and they ignore you. It’s all so very frustrating. They will have a game next week no matter how they perform and I say this is my job so we lose games and they must realise they are emotions on the bench and on the sideline. I said at the end that the three minutes added on was disgusting and he said ‘don’t call me disgusting’. I said ‘I didn’t call you disgusting’. I said the three minutes was disgusting and I then heard him say ‘Clancy is gone’. I shouldn’t have said what I said but it’s all so frustrating.” He concluded: “Week in, week out you are dealing with horrific referees. Some of their decisions are really awful but listen we will take the positives out of tonight and we right up there tonight with a very good Premier League team.”