Waterford FC manager Alan Reynolds was needless to say a very happy man when he spoke after the Blues 2-0 win over St Patrick’s Athletic.
“I’m thrilled because I thought that this was going to be a very tight game. It’s so early and you want to get points on the board as quick as you can but I’m delighted that we got a reaction after the defeat in Cork.
“I’m not saying that we were poor in Cork but we were eager to get a reaction and to get a win tonight. I think that we probably deserved it and maybe we could have scored a few more. We spoke about set pieces before the game that if we could get a decent delivery into the area and it was the ideal start. 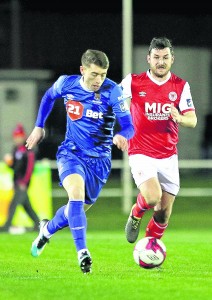 “It was a great delivery from Paul and a super header from Kenny. They’re not the biggest side so it’s good to get a reward from working at set pieces. The second goal is a brilliant goal. Bastien is a great character to be fair and what a player. We are lucky to have him and you saw tonight what he is capable of.
“I really didn’t see that coming if I’m honest. I see other parts of his game but I didn’t see a finish like that from him so it’s great. I agree that we are capable of beating any team in the league but I have to be honest and say that I’d like to see us do it for longer periods. 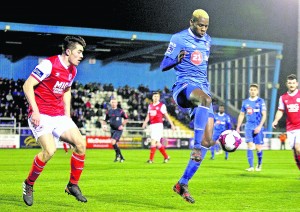 “I suppose we are trying to still get to know each other at bit but at times I’d like us to keep possession of the ball a bit better but I think that will come in time. I’m delighted for Izzy because he worked his socks off. He probably deserved a goal but he was looking to get one of those performances to kick-start himself.
“I spoke to Courtney Duffus there because it was his first game in a while. I told him to go express himself and not to play within himself. He is a striker and we have two of them up there so hopefully he can build on tonight and get a few goals for us. It was a good win tonight but we have to keep it going.”