The Gates Close at Walsh Park

County Final double header in ‘19 mooted for revamped ground
“In a perfect world, particularly taking the planning process into account, what I’d like to see is Walsh Park officially re-opening in October 2019 with a County Senior Final double-header, that’s what I’d love to see.”
That was the declaration made by Waterford GAA County Board Chairman Paddy Joe Ryan on Sunday last, speaking minutes before the Deise hurlers took on Clare in what may be the last inter-county match staged at the Keane’s Road venue for the better part of two years.
“We want a compact ground that everyone in Waterford GAA can be justly proud of; we all wish we had it in time for this year’s Championship, but that unfortunately can’t be done and we had to take a realistic decision (which was announced at last Thursday’s County Board meeting). The job we want to do now is the right one for the long term when it comes to Walsh Park and what I hope we’ll get now over the next few months in particular is the backing of all clubs and members, and the support of everyone for that matter who has the best interests of the GAA in Waterford in mind.” 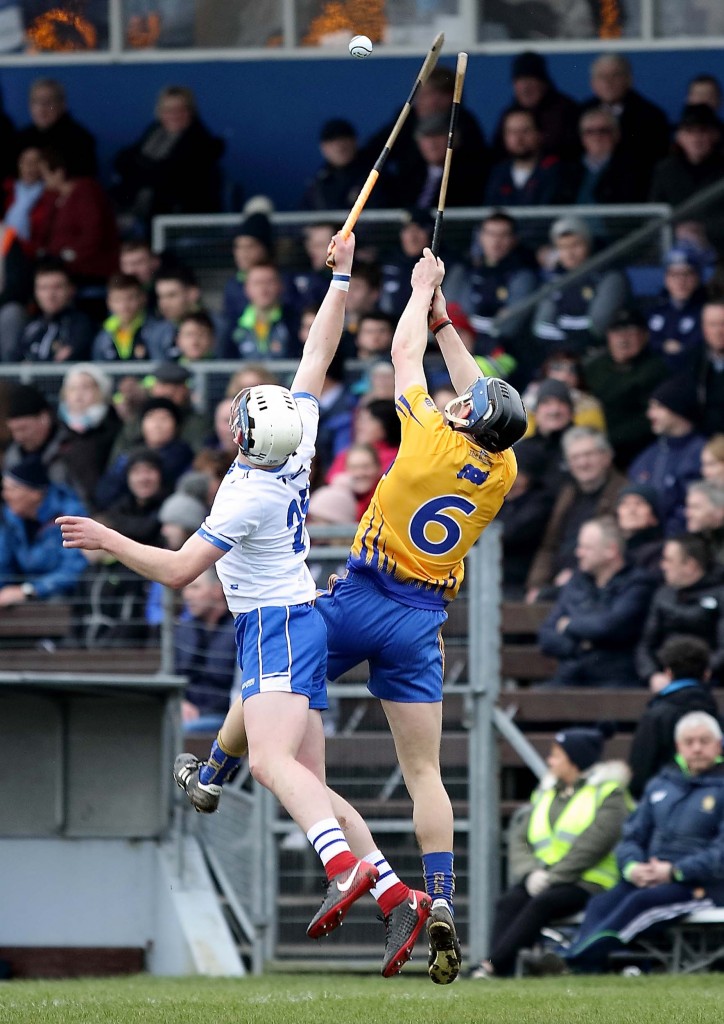 Stephen Bennett and Clare’s David McInerney contest a high ball during last Sunday’s NHL match at Walsh Park, a fixture which is likely to have been the last inter-county hurling match played in the ground’s current guise. | Photos: Noel Browne

With Paddy Joe Ryan adamant that the €4 million Walsh Park was “the only game in town” when it came to a major redevelopment option, it’s emerged that the County Board had examined the prospect of redeveloping Fraher Field, which would have involved rotating the pitch by 90 degrees.
However, it’s believed this alternative to the Walsh Park revamp was ruled out of bounds given the estimated outlay of €25 million that such a job would entail.
“What we can’t have happening again is to drive Waterford GAA into debt,” said Paddy Joe. “But of course that doesn’t mean that we do nothing. It means we look at what we can do and can achieve in a sensible and prudent manner. The last thing I want to see happening is for us to have to put a financial lean on the clubs again; no-one wants to see a levy re-introduced and we have to look at moving forward but being sensible about it.”
On Thursday last, the County Board confirmed that it has requested to play their two Munster Championship home fixtures, against Tipperary on June 3rd and Cork on June 17th, outside of Walsh Park. This came on the back of concerns raised by the clubs in relation to ticketing for the ground in its current guise, which Thomas Keane wrote about in this newspaper last week. It’s believed that some clubs may have been left with only 30 tickets to sell for either match if the games had gone ahead at Walsh Park.
Where Waterford will take on Tipperary and Cork has yet to be decided, but there’s already a potential stumbling block in relation to the prospect of Páirc Uí Chaoimh hosting the Waterford/Tipperary match on June 3rd given the staging of the Cork Marathon that same afternoon. Discussions, as Paddy Joe told WLR on Thursday last, are ongoing on that front.
It’s worth noting that Nowlan Park in Kilkenny, mooted as an interim ‘home’ venue for Waterford previously by former County Secretary Timmy O’Keeffe, is available on both June 3rd and 17th. However, one cannot imagine the Munster Council being overly enamoured at the prospect of two of its money spinning fixtures being held outside the province, despite the clear logic of Waterford crossing the boundary for just one summer.
Speaking on the matter back in December, Paddy Joe Ryan stated: “We want to have a lovely, compact stadium in Walsh Park which will be a credit to everybody. We don’t need a big stadium – look at how much of the year Limerick and Killarney lie idle – Limerick is shut fully for four months of the year so they don’t have to pay rates.
“You have to build what you need – and what we need is a stadium with a 16,000 to 18,000 capacity, and that’d be plenty when you take a home and away arrangement in Munster, a League semi-final or whatever basis the Munster Championship will be run on in the long term into account.”