Sion Pushed All the Way

Senior Hurling Championship Quarter-Final Play-Off
Mount Sion 0-21
An Rinn 2-13
Mount Sion advanced to the Senior Hurling Championship Quarter-Finals, but only after they were pushed hard by An Rinn in the opening game played at Fraher Field on Sunday afternoon.
Last year’s Intermediate Champions were given little hope by most, but they produced a full-blooded display that could have carried them to victory on another day.
In the opening half they were slightly the better of the two sides and in those opening 30-plus minutes they never found themselves behind the city club on the scoreboard.
But whatever was said in the Mount Sion dressing room at the break appeared to work as they came out an improved side, landing some vital scores which appeared to have pushed them well in front and within touching distance of the finish line. 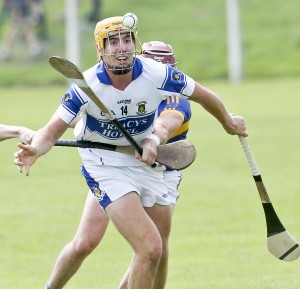 But the men from the Gaeltacht never gave up, hitting a vital goal from Christy Breathnach two minutes into the three additional minutes, following the other scored by older brother Donie at the mid-way point of the second half.That goal brought An Rinn to within one point of the Monastery Club side, with many inside the ground conceding that that Sion ought to have been behind by then.
In the 60th minute, Christy Breathnach tore down the bank side of the field attacking the country goal and blasted past the advancing Mount Sion goalkeeper Ian O’Regan, only to see his effort zip across goal and just wide when most were certain the sliothar was destined for the top corner of the net.
Sion initially struggled to play at the desired level, relying on inter-county star Austin Gleeson for the bulk of their scores.Fearghal Ó Ceallaigh and Donie Breathnach knocked over points Austin Gleeson opened Mount Sion’s account from a free. An Rinn added points from Fearghal Ó Cuirrin and another from Breathnach before Gleeson put over two on the trot, the latter a delightfully struck sideline from just over 45 metres out.Neither side were able to break free of the other in the time that remained in the opening half. Donie Breathnach and Fearghal Ó Cuirrín for An Rinn and Austin Gleeson and Stephen Roche swapped scores to send the sides to the dressing rooms locked at eight points each. 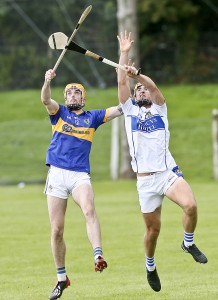 Martin F O'Neill and Donie Breathnach in an aerial tussle on Sunday last.

While Donie Breathnach and Fearghal Ó Ceallaigh (for An Rinn) and Austin Gleeson swapped early second half scores, the city side soon got on top with points from John Kennedy and a brace each from Austin Gleeson and Jack Meaney to send them clear.But An Rinn came right back into contention after Gleeson and Breathnach once more traded scores when Mark Hoban lost the ball on the bank side of the field and Donie Breathnach bore down on goal and he made no mistake in blasting past Ian O’Regan.Gleeson nailed another brace of frees and Donal Power hit one to cancel out the damage done by Breathnach’s three pointer.Ray Ó Ceallaigh and Donie Breathnach brought Mount Sion’s lead down to four (0-20 to 1-13) and it was in the next attack that Breathnach blasted just wide when it looked a goal was on. Sion went upfield and landed a point from Jack Meaney and in the next attack Christy Breathnach made up for his earlier miss finishing past Ian O’Regan.
An Rinn wouldn’t get another attack to try and send this game to extra time and when the ball went into their half of the field Austin Gleeson made no mistake when splitting the posts.