Barr wins bronze in Berlin
Thomas Barr’s ecstatic demeanour said it all as he crossed the line in Berlin last Thursday night. Sheer delight mixed with no doubt a smidgeon of relief enveloped Barr’s face with the realisation that he had won a medal at a major senior championship.Barr’s bronze medal in the 400m hurdles at the European Championships in Berlin was a long time in coming.
His career has promised this level of achievement on more than one occasion, particularly at these Championships in Zurich in 2014 where he came into the event as a leading contender, having broken the 49 seconds barrier for the first time just weeks previously. Barr failed to make the final in Zurich but while there were no medals won, the experience of championship running was probably as valuable and would certainly stand to the Waterford athlete in the years ahead. 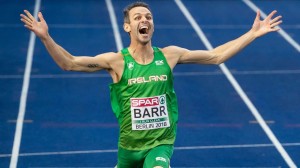 Watching the final on RTE television last Thursday, it was difficult to understand the panel’s pessimism. True, Barr’s semi-final time of 49.1 wasn’t exactly earth shattering and he did make the final as only the seventh fastest qualifier but if medals were handed out on the basis of semi-final times, there would be no need to ever run a final. Jerry Kiernan, in particular, seemed to think Barr would be ‘lucky’ to win a medal, citing the obvious dangers of Vaillant, Dobek and Magi. The panel seemed to disregard the fact that, given a chance in a final, Thomas Barr is more than capable of rising to the occasion and seems to truly embrace the moment. They seemed to forget that two years ago at the Rio Olympics, Barr improved his already brilliant semi-final time of 48.39 to 47.97 in the final.
The omens were good then as Barr emerged on the track at the Olympic Stadium in Berlin last Thursday.
His tweet earlier in the day of ‘Let’s go have some fun! Run fast, turn left, and jump…simples’ seemed to suggest his approach was extremely relaxed and just right, ahead of one of the biggest races of his career.
Drawn in lane eight Barr couldn’t see what the other athletes were doing but that allowed him to run his own race. He went off fast and although he expected eventual winner Karsten Warholm and Yasmani Copello to go by him, he knew he had the strength to hold off the challenge of France’s Ludvy Vaillant for the bronze medal. Barr’s time of 48.31 is the fastest he has run since he finished fourth in the Olympic final in Rio and he becomes the first Irish male medal winner in a sprint event in the 84-year history of the European Championships. A delighted Barr told RTE’s David Gillick immediately after the final that he knew he had it in him to win a medal. “I knew I’d have to run 48-low to win a medal and I knew I had it in me – I was nervous this morning and as the day went on I got more and more relaxed. Thank you to everyone who came out to support – I hope I made it worthwhile.”