Blues Reach Play-Offs With a Game to Spare

Ray Power’s U19 team qualified for the play-offs with a game to spare following this thrilling encounter at the RSC on Saturday last. When the manager has a full squad to choose from they are a match for anyone and that fact was proven in this game. Waterford took the lead with the first attack on four minutes when John Martin, on his return to football after an ankle injury, played an excellent through ball for Regix Madika and he finished superbly with a left-footed strike from 14 yards.Jack Larkin was denied a second goal for the Blues when he picked up the ball on the right-side of the penalty area and visiting keeper Peter Quinlan made a great save to turn the ball out for a fruitless corner kick. 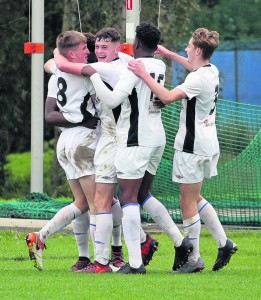 Jack O'Donnell (No 8) mobbed by team mayes after scoring the winner for the Blues U19's against Cabinteely at the RSC last Saturday.

Cabinteely levelled the game with their first attack on 13 minutes.Zak O’Neill turned provider for Luke Clucas, who let fly from 25 yards but the ball took a wicked deflection off a Waterford player and flew past the helpless Paul Martin.Colm Whelan cracked in a low shot on 30 minutes that was saved before the centre forward raced onto a through ball form Darragh Power two minutes, but his close-range shot was magnificently tipped over the crossbar by Peter Quinlan.John Martin was off target with a header after a Jack Larkin free kick on 38 minutes and in the final minute of the first half Martin played in Colm Whelan but again he failed to beat the in-form Cabinteely keeper from deep inside the penalty area.
Jack O’Donnell and Regix Madika had early chances for the Blues in the second half, but the Blues were undone with a long ball over the top from Conor Maguire on 65 minutes when Clayton Walsh fired to the back of the net.An excellent equalising goal came for Waterford two minutes later when Darryl Walsh did well to take the ball out of defence and linked up with Colm Whelan who unleashed a brilliant right-footed strike to the corner of the net from the edge of the penalty area.The winning goal arrived with 12 minutes remaining.Mike Nzongong took a pass from Regix Madika and sent Colm Whelan into the clear.His shot was parried by Peter Quinlan but Jack O’Donnell was on hand to fire the rebound home from deep inside the penalty area.