Home » Sports » Soccer » The Back Four Were Sublime"-Rory Feely

The Back Four Were Sublime"-Rory Feely

Rory Feely was one of the top players for the Blues on Friday and he was happy to play his part in the important victory over Sligo Rovers. “It might have been an ugly win but it doesn’t matter to us because it’s all about the three points. It’s a win that puts pressure on Shamrock Rovers so we’re just delighted to get the win under our belts.“It was a good defensive display from our point of view and it’s a happy win for us. The back four were sublime tonight and they dealt with everything that came at them which was important. Anything that came in deep, Niall (Corbet) was able to deal with so it was probably one of our best defensive displays this season.“We scored early in the game and it’s kind of difficult to see what happens from there. You either score a second goal or you do what we done and hold on to protect that goal. It was a bit of both from our point of view but in the second half, all we wanted to do was to keep our clean sheet.
“We dealt with things as the game was progressing and they did put us under some pressure towards the end of the game but I don’t think we ever looked like conceding a goal so we’re just happy to come out with a win and a clean sheet. 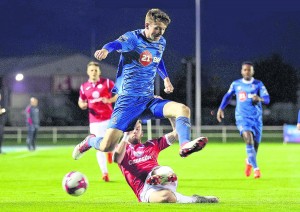 “Sligo are a good side and they moved the ball very quickly. I don’t think that they created many chances in the game. From our point of view it’s just great to get back to winning ways over the last two weeks. To get back to winning form at home as well is important and we’ll try build from these two results.
“We’ve got a bit of a break with the two cup semi-finals next weekend so we’ll enjoy that before we come back for the next game against Bohs. We know that it will be a difficult game away from home but we’ll prepare well for it, keep everyone fit and hopefully come away with three points from there.”