Anthony Brown and his trusted assistant Jim ‘Dukie’ Whelan are on the march once again with their charges in the FAI Inter League Youth Cup. Two years ago they cried tears of joy in Jackman Park when the squad they had under their guidance at that time went to Limerick and lifted the trophy after defeating the Shannonsiders in their own back yard.
This term their current crop of players have bought into their ideas also and on Saturday last they came away from Ferrycarraig Park with another brilliant victory and now they can look forward to yet another final appearance. 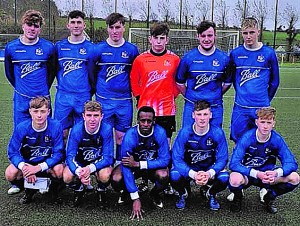 The Waterford League who reached the inter-league youth final with victory over Wexford.

In the previous game against the Mayo League they came out on top by three goals to nil in Ozier Park and they certainly brought that class into this match on Saturday last against an extremely strong and talented Wexford outfit. Isaac Johnson put Waterford in front after 23 minutes and two minutes later Billy O’Connor made it two nil. Those two quick goals rocked the home side but the hosts fought back and Cian Hanley brought them back into the game with a goal on 63 minutes and at that stage the contest was in the balance.
However Waterford recovered and the Ferrybank player Stephen Imiren scored a wonderful goal with two minutes remaining.The Waterford defence were rock solid all through the 90 minutes and up front Isaac Johnson and Stephen Imiren were sublime.
Johnson is of course a brilliant hockey player also and he played a pivotal role in the Newtown School All-Ireland success last year. Limerick or Inishowen will provide the opposition will provide the opposition in the final in a few weeks time.
At the time of writing the winners of that game will have home advantage but there is a possibility that the local league committee will make an appeal to have the match played in Ozier Park should Limerick come out on top in the act of fairness considering that Waterford had to travel there two years ago. If Inishowen come out victorious it will result in a long trip to the peninsula for the local squad.