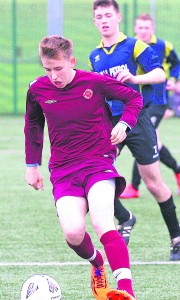 Michael Daly of St. Declan’s in control against Cashel CBS

St Declan’s of Kilmacthomas remain on course to retain the title they won so superbly last year following this victory in Carriganore last week.
Managed by Kealon O’Neill the current crop of players had to dig deep to grind out this victory against a talented Cashel CBS outfit.
Darryl Walsh, the Waterford U17 star and Irish international, scored the only goal of the game.
The Portlaw native scored the only goal of the game on 66 minutes to seal the deal for the champions. Last season St Declan’s defeated the same opposition 5-2 so this was a much tighter affair.
The victors should have struck the front with the first chance of the tie on seven minutes when centre forward Jamie Murphy got free down the left side before putting the ball on a plate for the inrushing Shane O’Brien but he somehow managed to blaze over the crossbar from deep inside the penalty area.
Ross Coffey O’Shea sent in a cross from the left side for the hosts two minutes later that really put the Cashel keeper Colm Hayde under pressure but Murphy’s header took a deflection that just took the ball the wrong side of the far post.
There was one final chance for the Kilmacthomas outfit on the stroke of the half time whistle when Ross Coffey O’Shea whipped in a corner kick from the right into a crowded area but the header from full back Eoghan Casey came crashing back off the crossbar before the ball was cleared by defender James Walsh.
St. Declan’s dominated for long periods of the second half with the top of the crossbar denying Luke Woods on 53 minutes.
St Declan’s got the vital goal on 66 minutes when Shane O’Brien did really well to slip the ball into the path of Darryl Walsh and he volleyed a left-footed strike past Cashel keeper Colm Hayde from 25-yards to put his side in the driving seat.
Walsh could have extended his sides lead from the penalty spot on 78 minutes when he stepped over the ball after centre forward Dean Walsh was brought to ground by defender James Walsh, who was sent off for his troubles but the spot kick struck the bar before going over.
There was one final chance for St Declan’s to give themselves some breathing space in second half injury time when Dean Walsh got free down the left side after he beat the offside trap but his right-footed shot to the far post just went wide.
ST DECLAN’S: Josh Kay, Eoghan Casey, Darryl Walsh, Ross Coffey O’Shea, Kevin Cheasty, Michael Daly, John Power, Luke Woods, Dean Walsh, Shane O’Brien, Jamie Murphy
CASHEL CBS: Colm Hayde, Cian O’Connell, Conor Horan, James Walsh, Ger Browne, Jack Hayes, Pat Muldoon, Alan O’Donnell (Cian Borgary `77), Mark Furlong (James Kirby `75), Rodrigo Gonclaves, Tom Keating (Joe Hennessy `72)
Referee: Noel Ryan.