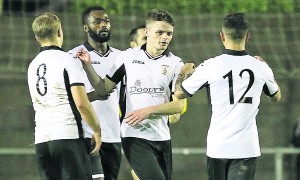 Tramore’s Robbie Mulligan is congratulated by his team mates after scoring in the second half.

Tramore advanced to the next stage of the Munster Cup in Graun Park on Saturday night when they proved to strong for the WWEC Premier League leaders Lismore.
The visitors from the Cathedral Town more than held their own during the opening 45 minutes but the hosts took over completely after the change of ends.
Lismore lined out with current hurling All Star Maurice Shanahan and his brother and also a former All Star Dan and the pair did well but unfortunately the former had to leave the action with a slight ankle injury two minutes into the second half.
Zach Shanahan rattled the Lismore crossbar with a snap shot after five minutes and shortly afterwards Stevie Barry in the Lismore goal did well to tip away an effort from Glen Hawe. The Westerners almost took the lead on 25 minutes when Gavin Pratt sent over a corner kick from the left. His fine delivery was met by Dan Shanahan but Andrew Halligan saved his powerful downward header.
Tramore broke the deadlock on 44 minutes when Stevie Barry kicked the ball out of his penalty area. His clearance however fell to Glen Hawe and he lobbed the ball over the head of the back pedalling goalkeeper from just inside the halfway line. It was quick thinking by the Tramore midfielder. Lismore got back on terms one minute later from the penalty spot. Maurice Shanahan played the ball through to Kenny Moore who was taken down by the diving Andrew Halligan and after dusting himself down, Moore sent the home custodian the wrong way from 12 yards.
Emmet Johnson replaced Zach Shanahan for the second period and he was to make a big difference to the home side as indeed was Johnny St Ledger who was introduced just after the hour mark.
Tramore regained their lead on 57 minutes when Andrew O’Connor split the Lismore defence with a brilliant ball and Robbie Mulligan raced forward to touch the ball past the stranded Stevie Barry.
The turning point came two minutes later when Dan Shanahan picked out Ray Barry from the left but his diving header came crashing back off the upright with Andrew Halligan well beaten.
From then on things went downhill rapidly for Lismore. The hosts made it 3-1 on 63 minutes when Andrew O’Connor’s 20 yard free kick took a deflection off Dan Shanahan and the ball looped over Stevie Barry. Johnny St Ledger, who was only on the field for five minutes made it 4-1 on 69 minutes after an effort from Emmet Johnson had come back off an upright. Johnson then got in on the scoring act when he finished off a neat pass from Stephen Grant after 72 minutes and ten minutes later Emmet Johnson scored his second goal when he headed home a left wing cross from Johnny St Ledger.
TRAMORE: Andrew Halligan, Jack Hale, Leigh Quilty, Ross Battye, Michael Caulfield, Andrew O’Connor, Stephen Grant, Glen Hawe (Gary McGrath `74) Mesach Babatu, Zach Shanahan (Emmet Johnson `46) Robbie Mulligan (Johnny St Ledger `64)
LISMORE: Stevie Barry, Shane Flavin, Alan Landers, John Healy (Brendan Landers `75) Kieran Hayes, Gavin Pratt, Ray Barry, Maurice Shanahan (Jordan Shanahan `47) Dan Shanahan, Kenny Moore, Craig Tobin (John Pender `64)
REFEREE: Noel Purcell.