League of Ireland, Premier Division
Derry City 1 Waterford FC 2
Waterford FC turned on the style on the banks of the River Foyle on Friday night last and in doing so edged ever closer to European football next season.
Following on from their FAI Cup victory against Skerries Town, the Blues were determined to get back on track in league football after three successive defeats.
They did just that in amazing fashion in the Brandywell in what was their best display of the season to date.
From the opening whistle it was clear to see that the team were well and truly determined to collect the three points on offer and they duly achieved their aim in stunning fashion.
Manager Alan Reynolds had to plan without midfielder Stanley Aborah (suspended) and striker Courtney Duffus (unable to play on astro-turf), nevertheless his team dominated the majority of the 90 plus minutes. 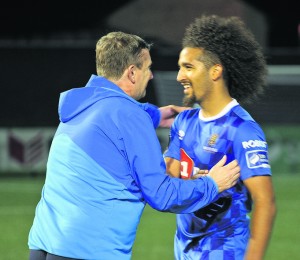 A number of the players in the blue shirt on Friday turned on the style and the performance of Bastien Hery was a joy to behold. The Frenchman not only thrilled the loyal band of Waterford fans but also the supporters of Derry City. Many of the red and white clad fans of the Candystripes went home raving about the display of the midfield maestro. Dessie Hutchinson returned to his usual midfield position, having played in defence in recent weeks, and he also showed why he is one of the top players in this division. In truth every single Waterford player stood up to the plate and this was a night to remember for a long time to come. To add to the occasion the news came through that their nearest contenders for Europe next season, Shamrock Rovers had lost to Bohemians and the gap between the two clubs has now returned to four points.
The Blues took up the running from the outset and went close after six minutes. Bastien Hery laid the ball out wide right to Dessie Hutchinson who crossed to Gavan Holohan but he was unable to keep his header on target. The visitors took the lead in the ninth minute. Dessie Hutchinson played a neat one-two with Noel Hunt and then gave the Derry City goalkeeper Gerard Doherty no chance from 10 yards.That goal rocked the hosts and Waterford continued to press forward at every possible opportunity and they went close again on 23 minutes.
Dessie Hutchinson picked out Sander Puri, who shot on the run but his goal bound effort was deflected out for a corner kick by defender Aaron McEneff.
Derry were lucky not to fall two goals behind after 28 minutes. Noel Hunt, who was also superb all through the contest, managed to get space inside the penalty area but Izzy Akinade made a mess of his pass and Gerard Doherty collected the ball, much to the annoyance of the Blues player-coach.
Derry City equalised on 31 minutes with what was their first real attack of the game. Rory Hale delivered the ball into the 18 yards box and when Rory Feely failed to deal with the delivery, Dean Shiels took full advantage and drilled the ball past the helpless Matthew Connor.The Blues scored what proved to be the winning goal 30 seconds before half-time.Bastien Hery played a delightful ball into the slipstream of Gavan Holohan who went racing into the penalty area. The Kilkenny born midfielder struck the ball on the run from inside the left side of the box and his effort took a slight deflection off defender Darren Cole and entered the net with goalkeeper Doherty completely wrong footed. Waterford took up the running once again in the second half and a third goal looked on when Dessie Hutchinsin slipped the ball to Noel Hunt on 49 minutes but Gerard Doherty did well to save at his near post.
Two minutes later Izzy Akinade had a glorious chance to lay the ball back to the unmarked Noel Hunt but the striker took the wrong option and shot weakly from a superb position.
The home side went close on 55 minutes when Ally Roy, who had scored four goals against Blarney in the FAI Cup the previous week, took off on a super run from just inside the penalty area but his shot on the run from the right side of the 18 yards box went inches wide of the far upright. Derry almost broke the hearts of the Waterford players and supporters with one minute of normal time left. Ally Roy made contact with a left wing cross from Ben Fisk but his acrobatic effort came crashing back off the crossbar with Matthew Connor beaten. The Blues never looked in danger during the four minutes of added on time and a rare victory was secured at the famous venue beside the River Foyle.