Munster u20 football championship quarter-final
Waterford 1-10 Clare 1-9
Tony Ryan Reports
In truth, not only did Waterford’s under 20 footballers surprise a fancied Clare fifteen at Fraher Field last Tuesday in this Munster under 20 quarter final-championship fixture, they surprised all but the most ardent of Déise supporters in the announced attendance of 363 big ball followers.That said, the first Déise win in this under20/21 Munster championship in thirteen years was as deserved as it was unexpected and their reward is a semi-final meeting with Cork in Clonakilty on Friday evening. 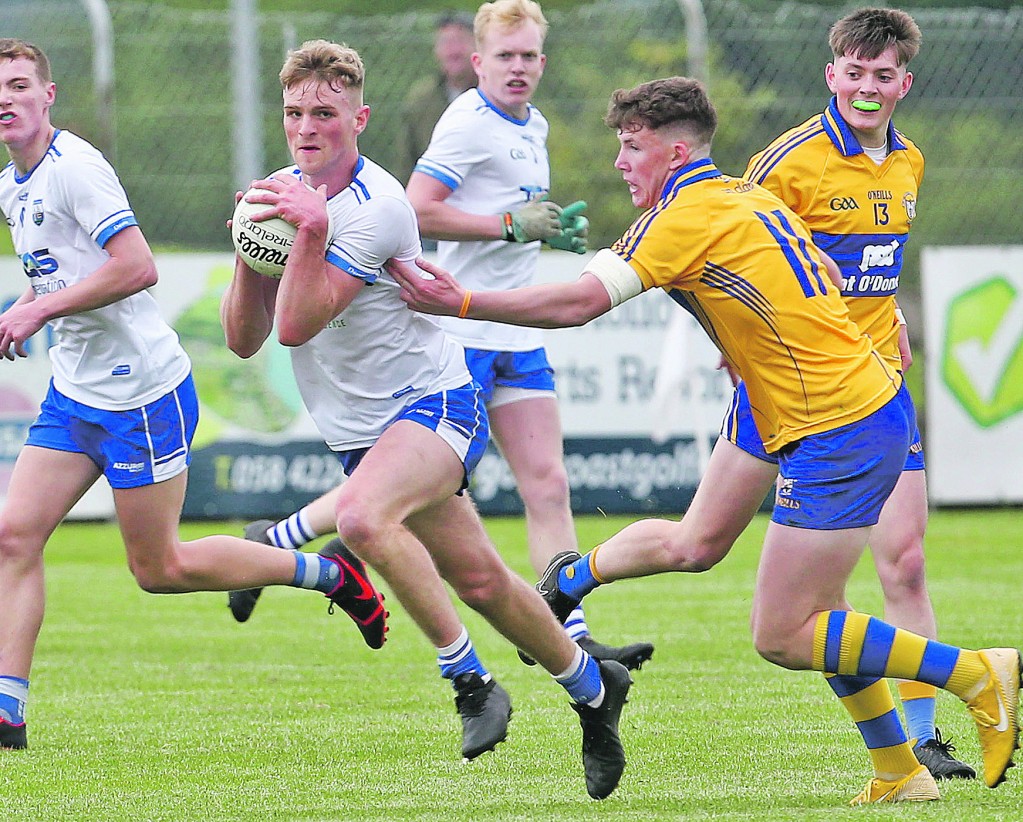 The team never played together before this game with a handful of the hurlers from the under 20 county hurling panel being drafted in and it was a move that worked a treat.From the outset, despite the concession of a goal after just 18 seconds, this team format gelled together and the spirit they showed and the footballing ability they possessed ensured a very entertaining and close game against a side that were expecting to be travelling to Clonakilty this Friday evening to play Cork in the provincial semi-final.
Another first round defeat in under age football looked to be on the cards when Cillian Rouine dashed through the Déise defence to plant the size 5 in the town end goal just 18 seconds after referee Sean Lonergan had thrown in the ball to start proceedings.Referee Lonergan made his mark on the game from a very early stage when he black-carded Clare’s full back Jayme O Sullivan in the first minute before both Darragh Corcoran(f) and Billy Power gave us an inkling that this particular Déise combination were not going to lie down with a minor score each by the fourth minute.
Clare full forward Diarmuid O’ Donnell and corner man Seamus Casey negated the Déise’s two scores by the sixth minute but the benefits of winning a lot of possession came to fruition in the 12th minute when team captain Stephen Curry placed Darragh Corcoran for a goal of real quality to level the game at 1-2 apiece.Corcoran edged the home side into the lead for the first time with a 13th minute pointed free before Diarmuid O Donnell scored likewise. Affane/ Cappoquin’s Jack Coffey, who performed very well in goal throughout and whose lengthy kick outs were an asset, saved a high delivery well in the 17th minute from the Banner’s wing back Tieran Hogan.Clare’s concern at this unexpected threat by Waterford saw them bring on senior player, returning from injury, Dermot Coughlan in the 20th minute before Darragh Corcoran kicked a contender for score of the match in the 20th minute as Gavin Whelan’s charges recovered their advantage at 1-4 to 1-3.
This period up to five minutes before the break proved to be a purple patch for the locals. Darragh Corcoran pointed a 23rdminute free and kicked a mighty score from his left leg, this time, from a pass by Sean Whelan Barrett to leave his team to the good by 1-6 to 1-3.Pressure from Clare resulted in the concession of three frees which Diarmuid O Donnell (2) and Seamus Casey converted between the 26th and the 29th minute to level the match for the fourth first half occasion, 1-6 each.Waterford performed equally as good on the resumption as their fitness was up to scratch and their spirit and attitude was out of the top drawer. This was emphasised in surviving a Clare dominant third quarter. Dermot Coughlan pointed Clare into the lead in the 34th minute and then Jack Coffey showed his worth as a net minder with a terrific save from Cian Shannon from an excellent Coughlan through ball with goal written all over it, 1-7 to 1-6.
Yet, Clare never went more than 0-1 in front and it was even stevens once more when Gaultier’s Darragh O Keeffe kicked a fine score from play in the 39th minute. Freetakers Diarmuid O Donnell and Darragh Corcoran traded minors by the 45thminute before the game’s most controversial moment was played out in front of the country end goal, 1-8 to 1-8.The match turned the Deise’s way in the 56th minute when Stephen Curry placed Daragh Corcoran for the lead point, 1-9 to 1-8 but two minutes later, Dermot Coughlan levelled with a free. Waterford had many leaders around the field and one of them, Tom Barron, claimed the winning score in the penultimate minute of normal time from a pass by joint captain Sean Whelan Barrett. Little went right for Barrett during the course of the hour but his nonstop efforts resultant in his involvement in the winning score, 1-10 to 1-9.
Five minutes of added time were correctly announced and Darragh Corcoran was wide with a free in the 63rd minute. The game looked to be heading to extra time when Clare rightly won a 65th minute free but in a pressure situation, Diarmuid O Donnell, who was banked on to see his effort sail over the bar, kicked wide of the posts followed by the final whistle and rare Waterford celebrations.