Thomas Barr: our man in Rio! 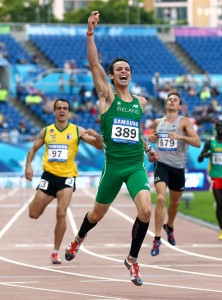 The Olympic Games began in Rio last week end but the athletics which many regard as the central attraction of the Games begins this week end and once again Waterford will be represented by an athlete at the Games as has happened each Olympiad since 1980.
Thomas Barr from Ferrybank AC, a native of Graiguearrida, Dunmore East runs for Ireland in the 400 metres hurdles.
Thomas becomes the second member of the Barr family to compete at the games; his sister Jessie was a member of the Irish 4×400 metres relay team in London in 2012.
Athletes born in County Waterford who have participated at Olympiads are as follows; John Treacy, Villierstown on four successive occasions 1980.1984,1988 and 1992.
He was silver medallist in the Marathon in 1984 in his first ever Marathon with a time of 2 hours 9 minutes 56 seconds, a new Irish record at the time.
Susan Smith, Waterford City competed in the 400 metres hurdles in 1996 and 2000. In 1996 she reached the semi final and finished fifth in 54.93 seconds, missing out by just one place to make the final. In 2000 she was eliminated in the first round when she finished fourth in 57.08, missing out by one place on making the semi final. Smith still holds the Irish 400 metres hurdles record. Patricia Walsh Ferrybank, Waterford City competed in 1984, where she did exceptionally well to finish ninth in the Discus, with a throw of 55.38 metres. She still holds the Irish record in that event.
Jamie Costin, Ring competed in 2000 and 2008 in the 50 km walk finishing 39th and 44th respectively and was also selected in 2004 but had to pull out after being injured in a car crash in Athens.
Next came Jessie Barr in 2012 on the Irish 4 x 400 metres relay team which didn’t progress and this year her brother Thomas runs n the 400 metres hurdles.
Barr, who won the World University 400 metres hurdles last year and has a personal best time of 48.64 seconds has had a very curtailed season due to a re occurring thigh injury. He competed in the European Championships last month making the semi final and he also ran very well in the Irish relay team there the team making the final but a few weeks ago he had to withdraw from a race in Dublin, mainly as a precaution.
He will be in action on Monday August 15th in Round 1 at 3.35 pm, the semi final is on Tuesday at 1.35 am and the final on Thursday at 4 pm.
Hopefully Thomas has recovered from injury as he may have to run faster than he ever has before just to progress to the semi-final.
He faces several athletes who have dipped under the 48 seconds including Copello, a Cuban running for Turkey who won gold at the European Championships last month.
All in Waterford athletics wish Thomas the very best in his difficult task in among the World’s best athletes.