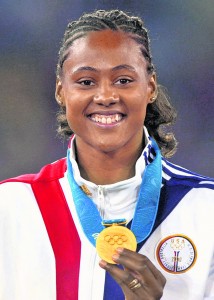 Marion Jones denied doping offences until she finally admitted in 2007 taking steroids before the Sydney Olympics.

The news of Michael O’Reilly’s failed drugs test along with the debacle over the participation of Russian athletes ensured that the build-up to the opening ceremony at last week’s Olympics was marred once again by doping controversies.
O’Reilly might have been one of the first athletes under the doping spotlight in Rio but sadly he won’t be the last.
The failure of the International Olympic Committee’s to impose a blanket ban on Russia following the astounding revelations of state-sponsored systemic doping means that the 271 Russian athletes competing at the Games will have their credibility scrutinised and doubted with every exceptional result.
Although as a sports fan I will watch as much Olympic coverage as I can it will be with a very cynical eye.
I remember watching in awe as Marion Jones sprinted her way to three gold medals and two bronze at the Sydney Olympics in 2000.
I completely believed Jones was different to athletes such as Ben Johnson, disqualified for using steroids three days after he won the 100m gold at the Seoul Olympics in 1988 or Linford Christie who returned an adverse sample at the same Olympics but escaped sanction after the hearing panel decided to give him the “benefit of the doubt”.
I thought Jones’ success was built on style, brilliant technique and an incredible desire to win. She had never tested positive for any banned substance and her marriage to shot putter CJ Hunter, who failed four pre-Olympic drug tests, was surely coincidental!.
What I didn’t know at the time of the Sydney Olympics was that Jones was hit with a four year ban in the early 1990s after missing a random drug test in high school. Lawyer Johnnie Cochran got the ban overturned but the rumours and innuendo had started.
Jones denied all allegations for years but finally in 2007 she admitted to taking steroids before the Sydney Olympics. On October 8th, 2007 she returned the five Olympic medals she had won in Sydney. Two months later the International Olympic Committee formally stripped Jones of those Olympic medals.
Jones claimed when interviewed by Oprah Winfrey in October 2008 that she would have won gold in Sydney without the assistance of performance enhancing drugs.
That assertion made it very difficult to understand why the most marketable and brilliant female athlete of her generation resorted to doping to ensure her success. Cathal Lombard, Ireland’s former long distance runner who tested positive for EPO before the Athens Olympics in 2004, confessed he had taken the drug to have an equal chance with everyone else.
“I didn’t set out to try to win medals or make money. I just wanted to be as competitive as I could and have an equal chance with everyone else” Lombard claimed at the time suggesting that doping in the sport had reached epidemic proportions.
With the prospect of zero tolerance to doping as far away as it ever was as and the continued admittance of athletes like the twice-banned Justin Gatlin into the Olympics, the cynicism and suspicions of the watching public will continue.
I will watch as many finals as I can in Rio but will probably question every time how many clean athletes actually make the line-up. I’m quite sure I won’t be the only one watching the Olympics with a jaundiced eye.