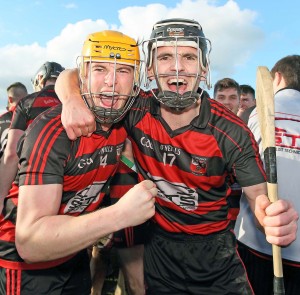 Ballygunner claim third successive Senior title as trip to Tipp beckons
In the end it was pretty much as expected. Raging hot favourites Ballygunner recorded a third successive Waterford Senior Hurling title victory with a whopping 17-point winning margin over neighbours Passage.
The final 10 minutes of Sunday’s contest saw the ‘Gunners outscore their opponents by 2-7 to 1-0, adding considerable icing to an already sweet victory.
The team with the best players usually wins the game. Never was this maxim better reflected than on Sunday afternoon.
The Denis Walsh-managed side is peppered with inter-county stars including the likes of Stephen O’Keeffe, Philip Mahony, Shane O’Sullivan and Pauric Mahony while Noel Connors was the lone Passage player to see senior inter-county Championship action this summer.
“I’m abolutely thrilled,” said a proud Denis Walsh, who sought out Passage totem Noel Connors for a handshake in the wake of the Deise corner-back’s defiant display for the men in red.
“The lads demonstrated great maturity, wasted very little ball, really and showed an awful lot of class out there today. Tbere’s a lot of die-hard players in our group who know exactly how to go about their business during a game and that really shone out for me today. I’m thrilled with how they played.”
Passage began with the breeze at their backs blowing towards the Keane’s Road end. An early dust up which involved some MMA-like antics between Barry Coughlan and Eoin Kelly jolted the Villagers into action.
Peter Queally’s charges struck five points in succession to buoy their supporters among the official attendance of 3,811.
Noel Connors was once again outstanding in his club’s colours but Passage really needed another couple of Noelies last Sunday. However, two goals in two minutes from the Gunners’ Tim O’Sullivan and Billy O’Keeffe signposted the eventual outcome of this game.
Many may well argue that an obvious Passage free preceded the game’s opening goal but there was no controversy surrounding Billy O’Keeffe’s fine finish for the second green flagger.
The vast expanse of space in front of the Passage goal offered the perfect environment for Brian O’Sullivan and Peter Hogan to operate in.
The elements certainly aided the eventual winners in the second half but the control offered by Philip Mahony and David O’Sullivan in particular allowed them to dominate. So too the efforts of the less heralded Ian Kenny and Shane Walsh.
Multiple points from Pauric Mahony, Brian O’Sullivan and Peter Hogan gave the Gunners a comfortable 2-13 to 0-12 lead with 10 minutes to go.
But it required a truly remarkable save from county custodian Stephen O’Keeffe, when denying Conor Carey a certain goal to maintain the Gunners’ fat lead.
Interestingly, this seven-point lead was exactly the same margin as Ballygunner enjoyed in 2013 at a similar stage in that game. But there was going to be no miracle comeback this time round though, no second strike of Barony lightening.
Instead, Gunners substitute Stephen Power blasted a third goal before man-of-the match Pauric Mahony added a fourth, just to be sure.
With a three in a row confirmed, the Munster Club Championship has now fallen immediately into Ballygunner’s focus, with the Deise champions travelling to Semple Stadium to take on Thurles Sarsfields this Sunday at 2pm. A team full of big day performers will surely relish a big day like it, and they might just keep this wagon rolling well into the winter – and beyond, perhaps.