Three in a Row for Impressive DLS

Brian Flannery Reports
2017 County Under-21 ‘A’ Hurling Final
De La Salle 1-12
Abbeyside 1-8
De La Salle won their third U-21 ‘A’ county hurling title in a row when they had four points to spare over western champions Abbeyside at a damp and cold Dunhill on Sunday last.
From the moment man-of-the-match Eddie Meaney hit the back of the net in the second minute, De La Salle took control of this game and led from there to the final whistle.
Abbeyside reduced the margin to a single goal with three minutes remaining, however Captain Shane Ryan nailed a long distance free to confirm a record third title in a row and a fourth in five years for the Gracedieu side.
Eoin Kiely converted an early free for the Villagers but the western champions were rocked early when Meaney caught Gavin Coppinger’s line ball before sending his angled drive to the back of the net.
The De La Salle defence was on top with Adam Doyle, Conor Giles-Doran, Mikey Costigan and Shane Ryan all excelling with Abbeyside failing to register a single score from play in the opening half.
The electric Cormac McCann hit a fine point in the sixth minute with further minors from Brian Cunningham (a free) and Eddie Meaney helping the eventual winners into a 1-3 to 0-4 lead after 15 minutes.
Centre-forward Evan Whelan, Thomas Douglas and McCann again all pointed in succession in the second quarter with another Eoin Kiely free the sole Abbeyside response. De La Salle was in a commanding position at the break leading by 1-6 to 0-5. 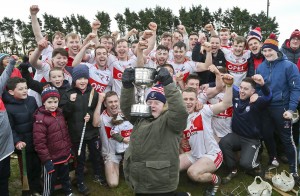 Brian Cunningham extended this lead to five points with an early free. Former county minor Neil Montgomery had his sides first score from play in the 35th minute and when the youngster was fouled a couple minutes later, Eoin Kiely again converted to reduce their deficit to a goal (1-7 to 0-70.
De La Salle moved up a gear again and four points on the trot from McCann (his third from play), Brian Cunningham (with a brace) and Eddie Meaney extended their advantage to seven points, 1-11 to 0-7 with just twelve minutes remaining. Thomas Douglas also had a goal effort well saved as Abbeyside were struggling to keep pace.
With time running down Abbeyside mentors threw caution to the wind and sent county man Conor Prunty into the forward line.
Prunty made his presence felt and after 50 minutes he was pulled back on route to goal by a posse of defenders with referee Michael O’Brien having no hesitation in outstretching his arms to signify a penalty.
Eoin Kiely stepped up once more and crashed his effort high into the net (1-11 to 1-7). Substitute Stephen Cliffe pounced to reduce the margin to a single goal, 1-11 to 1-8 after 57 minutes. Abbeyside threatened but De La Salle’s defence stood firm and with time elapsed Ryan boomed a late free between the posts. 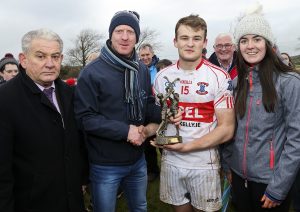