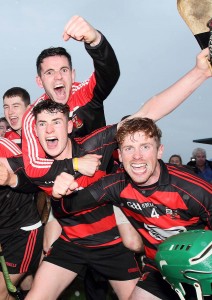 Relying too heavily on emotion is a gauntlet most teams do their utmost to avoid running. Yet trying to keep feelings in check amidst enormous upheaval is not always easy: just ask anyone from Ballygunner in the wake of Paul Foley’s loss.
For this has been no ordinary time in the history of the McGinn Park-based club; after all, ‘Foley’ was no ordinary clubman, as Fergal Hartley’s touching tribute in Sunday’s matchday programme reminded us.
The aftermath of Sunday’s County Senior Hurling Final victory, amidst the joy of securing back to back titles for only second time in the club’s history, was as soaked in mixed emotion as it was by the Walsh Park rain.
It was etched across the faces of those within the club who knew and loved Paul best, and to those who didn’t refer to him by name, there can’t have been too many, if any, who didn’t pass a thought to him or his family at full-time.
In the thick of the post-match celebrations last year, as consumed by that victory as he was by the six Championships he helped to win on the field, Paul Foley’s absence will be felt for many, many years to come. This certainly wasn’t the same without him.
“Hurling, in comparison, is only a minute detail,” said Gunners goalkeeper Stephen O’Keeffe in the wake of his side’s four-point win over a determined Tallow outfit. “What we did today, at least if it brings joy to people for only a few hours, it was worth it.”
According to Gunners boss Denis Walsh: “To be fair, as an outsider, I mightn’t fully understand; I knew Paul a little bit and over the years I knew of him very well. As an outsider, maybe sometimes you don’t understand that but when I saw how it affected the lads, the fact that he was Shane O’Sullivan’s brother-in-law, it did have an effect, there’s no question about that.
“We had no training that week really and we then had to get ourselves up for the Fourmilewater game and we had to put a lot into that game from that point of view.
“And maybe we were a little bit flat at times today even, it may well have been one of the reasons, but the lads showed great character, and they wanted to win for every man, woman and child in the club from that point of view, to soften the winter in that context.”
O’Keeffe, the last line of a defence which kept a fifth clean sheet in seven Championship outings, added: “The result was always in doubt, right up the final whistle, and you could see that in the reaction of the players as soon as the whistle went. We’d tremendously tough battles in the quarter-final (Mount Sion) and the semi-final (Fourmilewater) as well, both of which followed a very similar pattern to this game, when there was really one score in it for most of both games and I felt that really stood to us today.”
The Munster Championship semi-final awaits on Sunday week, with Glen Rovers, still celebrating their first Cork title in 26 years, no doubt relishing the trip to Walsh Park.
“The Glen have great spirit; I’ve seen them this a few times obviously, and that’s going to be a great battle and that’s great in its own right,” said Denis Walsh.
And perhaps the memory of another great spirit shall come into play the next time the red and black take to the paddock. Because last Sunday’s win was unquestionably for ‘Foley’.