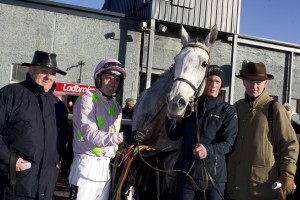 Champagne Fever with Ruby Walsh aboard after they won the listed 2m 6f chase at Thurles Photo: Patrick Mc Cann

The final race meeting of the year at Wexford took place at the popular Bettyville venue on Tuesday of last week and Cappagh-based handler Declan Queally sent out Cloudy Morning to record his third success of the season in the Loch Garman Handicap Hurdle.

This performance becomes all the more meritorious when one considers that Queally only commenced training the winning son of Cloudings this summer.

On this occasion, Cloudy Morning was sent off the 6/1 second favourite of the 13 runners with talented seven lb claimer Barry Browne in the plate.

He tracked the frontrunning Zipporah until stylishly making his way to the front on the approach to the second last.

The triumphant eight-year-old forged clear before the final flight and he duly dismissed For Sinead by nine lengths in the colours of his Bartlemy-based breeder Michael O’Donovan. It’s possible that Cloudy Morning will now be primed for an assault on a handicap hurdle at Leopardstown over the Christmas period.

St Mullins native Richie Deegan partnered his initial winner for handler David Christie aboard Maple Mons in the Rosslare Hunters Chase. Maple Mons, an outstanding mare in the point-to-point ranks that has already won nine races ‘between the flags’, made her way to the front before the second last and she bravely kept favourite Sizingdowntherhine at bay in the closing stages with a half-length the winning margin.
Maple Mons will continue to run in point-to-points before connections will aim to put her in-foal in the spring.

Thurles was the mid-week racing venue on Thursday and the Willie Mullins-trained Champagne Fever, a former dual Cheltenham festival winner, won a thrilling renewal of the Boomerang Animal Bedding And Boomerang Horse & Country Store Chase. This was a listed race over two miles six furlongs and the triumphant grey disputed the running until setting sail for home under Ruby Walsh with three fences remaining. 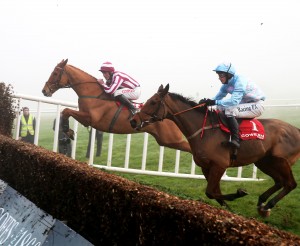 Champagne Fever was joined by the long-absent Lord Windermere, the 2014 Cheltenham Gold Cup winner, at the second last. It was virtually nip and tuck from there until Champagne Fever edged into a narrow lead from the final fence and he duly beat the gallant Lord Windermere by a head with a three-length break to the third-placed Roi Des Francs.

Mullins later indicated that Champagne Fever, now a nine-year-old, is likely to be kept to Grade 2 and Grade 3 company for the foreseeable future.

The Saturday meeting at Gowran Park was beset by fog and Davy Russell kept his supporters happy by landing a most competitive Gowran Park Thanks To All Our Customers In 2016 Chase aboard Andy Lynch’s the progressive Zabana.

Already rated 153 over the larger obstacles, the seven-year-old Zabana made progress to lead three out. Kitten Rock, a horse that was almost at Champion Hurdle standard over flights, went second coming to the final fence.

Although closing from the last, Kitten Rock was still some one and a half lengths adrift at the death. It’s possible that Zabana could now be targeted at the Grade 1 Lexus Chase at Leopardstown on December 28th.

There was racing at Navan on Sunday and Gordon Elliott made his own bit of history at the Proudstown Park venue by saddling an amazing 41,276/1 six-timer on the seven-race card. The featured event was of course the Ladbrokes Troytown Handicap Chase and Elliot, who fielded an 11-strong assault on this race, sent out the winner in the form of Empire Of Dirt.

A Cheltenham festival winner last season for the now-retired Colm Murphy, Empire Of Dirt was having an initial start for Elliott here and he was sent off a 12/1 chance. The winning son of Westerner took up the running with Bryan Cooper before the final fence and he duly bounded clear on the flat to contain Ballyhale-based handler Ellemarie Holden’s Abolitionist by four lengths.

Empire Of Dirt, purchased as a three-year-old for €325, 000, should develop into a prolific handicapper this season and his career must be followed with interest from here.

Elliott’s fifth winner of the day came courtesy of Jury Duty in the €50, 000 Proudstown Handicap Hurdle over an extended two miles six furlongs.

Jury Duty took up the running travelling best with teenager Jack Kennedy before the second last and he went clear on the run-in to beat Scoir Mear by one and three quarter lengths. Elliott later indicated that Jury Duty could be aimed for the Pertemps Handicap Hurdle final at the Cheltenham festival. There is a local connection with Jury Duty as the son of Well Chosen started his career in point-to-points with Tramore-based handler John Flavin. Jury Duty actually finished third in a Ballyarthur maiden point-to-point as a four-year-old in April 2015 before being purchased by Elliot at that year’s Doncaster spring sale.