The National senior, junior and juvenile Cross Country Championships were held in Abbotstown Co Dublin on Sunday last and huge fields were the order of the day in all events with all 32 counties represented.

In the senior men’s race Shane Quinn Ferrybank AC home from the USA especially for the event eventually finished eighth with a good effort having been in the first four or five for a good portion of the race.

In the junior race Barry Keane Waterford AC caught the eye as he finished fifth with another brave effort. 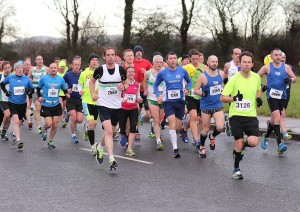 In the under-age championships there was a terrific run by Lucy Holmes West Waterford as she finished second overall in a huge field in the U16 grade, David Mc Glynn Waterford had a big run also in the U18 grade finishing fourth and just two places behind him with another good effort was his great rival Miceál Power West Waterford who beat McGlynn by one place in the Munster equivalent.

Others with high placings were Ally Cunnngham ninth girls U12, Oisin O’Riordan and Cian O’Riordan were both 10th U14 and U16 respectively.
Tommy Fennell was 11th U16 and Caoimhe Dwyer was 12th U12, all West Waterford and all these athletes have been most consistent at Munster level also.

Turkey Trot
On Sunday last also the eighth annual Paddy Joe Curran Memorial Turkey Trot 5 Miles and 4 miles walk was held at Pulla, just outside Dungarvan .Co Waterford and a total of 260 participated.
The overall winner was Damien Murphy (West Waterford) in 26 minutes 43 seconds, Danny Smyth (Ballynonty) was second in 28;03 and Nigel Sheehan (Youghal) was third in 28;05.
First woman home was Kate Veale (West Waterford) in 32.45, Sinéad Brannigan (Waterford) was second in 33;31 and Deirdre Ansbro (Youghal) was third in 34;12 and the proceeds go to SERT.

Waterford AC Half-Marathon
On Saturday next at 10 am sharp the annual Waterford AC Half Marathon will have an entry of over 2000 and it starts and finishes at WIT Sports Campus Carriganore.
The course will come in the Old Kilmeaden Road as far as the Industrial Estate then proceed through the estate coming out on the Cork Road by Mc Connells Garage, cross the road heading down The Witches Lane in Ballybeg, out Lacken Road ,over Green Road ,Outer Ring road, out to The Holy Cross and head over to Old Kilmeaden road down Olivers Hill and back in to WIT.
Full coarse on race website. There is no need to check in on race day. There will be a help desk on the day to answer any queries you have, please note however the organisers will NOT be in a position to reissue your number or timing chip so be sure to have them with you on the day.
While there is plenty parking at the race headquarters please allow yourself enough time should you have to park in the overflow car park which is 2km away. All competitors to wear numbers on chest and not be covered by clothing and if you cannot compete on the day please do not give your number to someone else.

Munster Cross Country
On Sunday next the Munster Juvenile “B” Juvenile and Intermediate Cross Country Championships are in Clarecastle GAA Club Grounds , Clarecastle, Co Clare at 11.30 am. A small contingent of athletes from Waterford will compete.