FURTHER calls have been made in support of linking the Waterford Greenway with surrounding villages.
Portlaw-based Councillor Declan Clune (SF) said a route has been identified which would connect Kill village to the Greenway.
Cllr Clune believes this would also open up possibilities for linking the Greenway to Bonmahon.
“We’ve often spoken about Bonmahon and how run down it is,” he said. While describing the village as “fabulous” during summertime, Cllr Clune said Bonmahon is in need of urgent rejuvenation. He said the Greenway has been “fantastic” for the likes of Kilmacthomas and Durrow but expressed hope that others areas could also “share the success”. 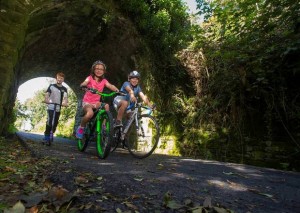 Kevin Dwyer, Gráinne De Paor and Sean De Paor pictured on the Waterford Greenway. Adding new 'spurs' to the cycle route have been touted by public representatives and community activists.

Cllr Clune said linking Kill to the Greenway and then developing a cycle way to Bonmahon would be a long term project worth exploring. Addressing the matter at the January meeting of the Comeragh District, Senior Engineer Gabriel Hynes said the issue could be discussed with the Council’s Economic Development division but pointed out that funding is restricted.
Mr Hynes explained that funding for such a project can’t come from the District’s funds for local and regional roads and would have to come from the Town and Village Renewal Scheme or the Rural Regeneration and Development Fund.
He said he recognised there are many demands and said issues could be discussed at an upcoming workshop.
Meanwhile, Cllr M J O’Ryan (FF) has called for the new Greenway Bridge at Kilmacthomas to be illuminated in different colours for specific occasions.
Describing it as “a brilliant piece of infrastructure”, Cllr O’Ryan suggested the bridge could be illuminated in blue and white for prominent Waterford GAA fixtures, green for St Patrick’s Day and the colours of the US flag for Independence Day on July 4th.
Cllr O’Ryan asked if the Council has the authority to do this and pointed out that the bridge is located “in a prime position” on the N25. In response, Gabriel Hynes confirmed that the bridge is Council property and said the suggestion could be considered.
Meanwhile, Green Party Local Election candidate Marc Ó Cathasaigh has joined calls for a potential off-road link between Portlaw and the Waterford Greenway. “Between Curraghmore and Portlaw Woods, as OSI maps indicate, there are miles of trails which could be availed of,” he said.
“This would deliver a huge boost to the Portlaw economy, would add to our Greenway tourism offering and would also make multi-day stays more likely. These folk want biking, feeding and a few pints. They’re year-round, all weather. They’re the cleanest type of tourism you can get! With cross-party effort, we could bring this type of investment to Waterford and I’d be happy to work with anyone who wants that.” Joining in the Twitter discussion, Senator Paudie Coffey said that such a proposal was being actively pursued by local public representatives, in addition to the local community. “I agree that there is so much potential (for) it there is we can unlock it,” he stated. The prospect of an additional off-road spur could be facilitated via a Coillte/Fáilte Ireland/National Tourism Authority partnership, which is initially supporting four national trail centres across seven counties (Limerick, Cork, Offaly, Laois, Dublin, Wicklow and Sligo), taking in over 300 kilometres of trails. A total of €13.6 million is being facilitated for this project by the Government’s Rural Regeneration and Development Fund.