WATERFORD’S record breaking Viking sword, the ‘Dragon Slayer’, has been officially unveiled at its new home in the heart of the Viking Triangle.
The 23 metre long creation was unveiled on Friday December 22nd by Mayor of Waterford City & County Cllr Pat Nugent (FG) who was joined by Waterford Minister John Halligan, the Norwegian Ambassador to Ireland Else Berit Eikeland, and Dungarvan actor Moe Dunford, star of ‘Vikings’, ‘The Tudors’, ‘Game of Thrones’ and ‘St Patrick’s Day’.
The sword was the brainchild of artist and wood sculptor John Hayes of Special Branch Carvings who transformed a storm-felled tree from Ballinamona Woods which, thanks to the generosity of the Bogassian family, was made available to create what is the world’s largest wood sculpture.
In collaboration with the staff of Waterford Treasures Museums in the Viking Triangle and of the Architects Section, Economic Development, Waterford City & County Council, John Hayes created a Bayeux tapestry-like narrative story in wood, telling the fascinating story of the coming of the Vikings to Ireland and their eventual assimilation.

Earlier this year, John, who is well known thanks to the success of many different projects including the ‘Angel of Fenor’, set his mind on trying to create a new world record for the longest carving from a single piece of timber.
The sword was commissioned by Waterford City & County Council and John worked on the sword for over a year with his colleague James Doyle.
After carrying out significant work on site in Ballinamona, his sword was then transported to the National Ploughing Championships’ grounds at Screggan in County Offaly where it was on display at the Oleo-Mac stand during the three day event as John put the finishing touches to his masterpiece. 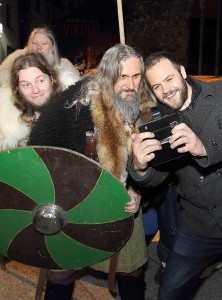 Moe Dunford, the Waterford born actor in 'Vikings', pictured taking a selfie with some Waterford Vikings!

His impressive creation was declared to be a new world record on the final day of the Championships.
John says he has been “blown away” by the response to his creation.
“I’ve been genuinely taken aback by people’s reactions,” he said.
“You get so caught up in the small details that you forget about the overall impact which the sword makes.”
John, a proud Déise man, is keen to promote Waterford at every opportunity.
“Breaking a record was great but being able to do something for Waterford is a big thing for me. I’m proud of where I come from, but we have to be confident in what we do and believe in ourselves,” he said.
John says many people who stopped to admire the sword at the National Ploughing Championships said they would “definitely” be coming to Waterford to see the creation in its new home.
John has had an incredibly busy year having recently competed at the English Open Chainsaw Carving Competition where he placed fourth.
The new sword will form an important part of an exciting new Viking festival for Waterford – the details of which were revealed at the Ploughing Championships by the Norwegian Ambassador to Ireland Else Berit Eikeland.
The festival is set to take place at Easter and will celebrate Waterford’s Viking heritage.