Comeragh College: a new dawn for education in Carrick-on-Suir

The €13 million, 68,000 square foot Comeragh College, which was completed as a turnkey development last March.

“For us, this is certainly a new world for us in this new school,” said Comeragh College Deputy Principal Kathleen O’Donnell-Ryan, following the College’s Student Choir’s rendition of ‘World In Union’ at the official opening of the magnificent Tinvane campus on Friday last.
The 6329 square metre (68,000 square feet) Comeragh College opened its doors to students and teachers for the first time on April 4th last, and officially opened just 70 weeks after construction on the site had commenced.
Its infrastructure, as well as its capacity to hold 500 students, ensures that those who attend Comeragh College are given the opportunity to develop as students both physically and academically. This is a core belief that the school constantly upholds.
The two-storey school encompasses 16 specialist classrooms, 11 general classrooms, a PE hall, a general purpose hall, a Special Needs Unit, a 48-space car park, five ball courts and a GAA playing pitch, flanked down one sideline by a pair of splendid oak trees.
Comeragh College is a Co-Education Secondary School and is managed by BAM services. The supports in place ensure that the needs of both students and teachers are catered for.
At last Friday’s official opening, Principal Kevin Langton said he was “humbled and delighted” to see the College’s magnificent PE Hall packed to capacity on what was “the greatest day in the history of this school”. 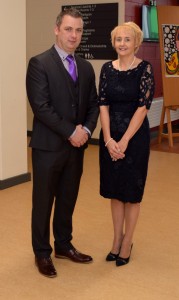 Addressing the gathering, a proud Mr Langton stated: “Today we celebrate the completion of this fantastic educational facility. We can now say with pride that Comeragh College, here at Tinvave, is complete, and is already serving the needs of the students in the Carrick-on-Suir area.”
On Friday last, prior to the formalities, staff and students at Comeragh College were excited to show the public what has been produced, and what a facility they now have at their disposal, the jewel in County Tipperary’s second level crown. 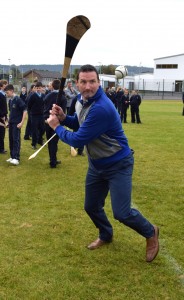 The facilities on offer in the school, which were turnkey ready as of last April, are cutting edge and are there to ensure that all students are included and their learning abilities are catered for.
Said Mr Langton: “On January 5th 2015, we were on site here to witness the first two machines being unloaded from transporters, as well as container loads of temporary fencing, on a day that marked the beginning of the actual physical process of building our school.
This date and event may not seem significant, but to us, who had waited for this for many years, this was monumental. It announced, in a very tangible way, that the school was at long last being built and at that stage we could only imagine what we now have here today. But day by day, week by week, month by month, each stage of the construction process was completed., and on schedule.” 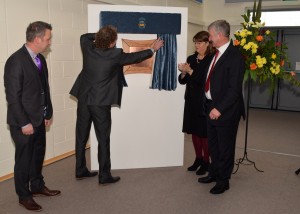 The inclusive education that Comeragh College provides ensures that students are thoroughly prepared for every facet of life both inside and outside of school; with the Public Private Partnership that the school has in place reflecting that.
All members of the school feel very privileged to have so many modern facilities at their disposal. To allow for students who have a love of science to fully realise their potential in that subject, there are three fully functioning science, preparation and demonstration rooms available.
Additionally, there are fully equipped rooms to cater for subjects such as Computers, Home Economics, Engineering, Music, Drama, Woodwork, Metalwork and Religion. Those who have a love for languages are given a plethora of opportunities to develop their linguistic skills in this school.
The teaching staff of Comeragh College are well-equipped linguistically and have an extensive amount of experience in their subject.
This, paired with ICT facilities in the school means that students start and leave school with a love for any language that they study. In today’s fast pace society, knowing and using another language gives you a competitive edge. Making sure that students have a competitive edge is reflective of the €13 million spent on the school.
The Comeragh Suite that is available in the school allows for students with special educational needs to learn how to fully integrate and maintain their roles as strong and confident members of society. This adheres to Comeragh College’s belief of providing and inclusive education for all. 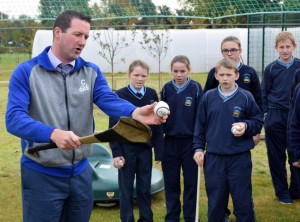 As a school that strives for excellence, the number of students attending the school really reflects that.
There are approximately 350 students in the school, with an increase of 50 students this year, a telling and productive statistic which says much for the vision who drove this project since Pat Callanan and Michael Kelly’s time as Principal and Deputy Principal respectively.
Another figure rightly remembered at last Friday’s official opening, by Tipperary Educational Training Board (ETB) Chief Executive Fionnuala McGeever,was late Carrick-on-Suir Councillor Dinny Bourke, who was among the long-standing voices that supported the provision of a new school to replace what was long known locally as ‘The Tech’.
To maintain a high standard of education, the school ensures that there is a seating plan in every room for every lesson. Furthermore, teachers make sure that no lesson is over subscribed.
Normally, these extremely high standards are very difficult to maintain but thanks to the strong relationships that the school has in place with its different means of support, it is a seamless process.
Said Kevin Langton: “Our school has always believed in the concept of a learning community but this new building makes it so much easier to develop and extend that community. In the past eight months, I’ve observed that all members of our school – students and staff and even visitors to the school, have had an additional pep in their step – and our hearts have been lifted.
“And while the structure of the school is magnificent, both inside and outside, it’s still just a building, until you add the school body to it. Beliefs, values, atmosphere, philosophy: all of these elements are what help to make a school and when you combine that with the environment which has always been in existence among our staff, our students and their parents, it’s clear that we have the winning formula.”
That winning formula now has fresh air to circulate in within a stunning campus that has set the standard for turnkey school developments not only in Tipperary and the South East, but throughout the country. We wish Kevin Langton, his staff and his pupils every good wish for the exciting years that lie ahead for all at Comeragh College.