Musical: Tell Me On A Sunday (Everyman, Cork) 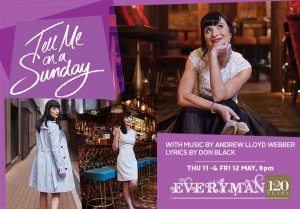 Irene Warren wowed audiences in 'Tell Me On A Sunday' at Cork's Everyman.

Musical: Tell Me On A Sunday (Everyman, Cork)

There was a sustained, enthusiastic standing ovation for Irene Warren at the Everyman (Cork) in her solo portrayal of ‘Tell Me On A Sunday’.
This was a splendid evening of musical theatre written by Andrew Lloyd Webber and Don Black that was a West End and Broadway hit.
Running for 90 minutes without an interval with a five-piece band on stage. This show began life as an early eighties song cycle as part of Song And Dance, but by 2003 it was a one-act show.
Directed by Trevor Ryan with musical direction by Ronan Houlihan in a wonderful setting of kitchen, bedroom, sitting room and writing table where she wrote wonderfully wry letters to her mother.
This English girl went to America in search of love and happiness, but her Mister Right’s did her wrong. This was a revelation in musical theatre with elements of love, bliss, happiness, distance, rumour, realisation, regret and more resolutions.
There was a cry from the heart “I can’t live like this anymore”. In a song like ‘Take That Look off Your Face’, you sensed the impending disintegration (“see through your smile” and “bad news to your door”).
The audience related to the various versions of ‘It’s Not The End Of The World’ (‘If I Lose Him’ and ‘If He’s Younger’). You could feel the shared emotion and memories of the choices that we make and will make again if we are lucky, and we must believe that we are lucky. Always lucky, but expecting more than we are given or giving.
Her’ Letters Home To Mother’ were a wonderful, wry joy with the gushy expectation that this is the right time; the right choice.
That high of “making love every hour” while your “shirts are drying” and the “getting the show rolling” and the compromise of “I’ll even go bowling”.
The high point for me was the surprise impact of ‘Unexpected Song’ (“like an unexpected song that only we are hearing”).
There was the plaintive ache of the title song; “let me down easy, no big song and dance”; “take me to a zoo, that’s got chimpanzees” and the sadness of “don’t want to fight day and night”; “don’t leave in silence”; “don’t get drunk and slam the door”; “circus ring, a flying trapeze”.
This was a show where Irene Warren (the original Kitty Kiernan in Bryan Flynn’s ‘Michael Collins’) dug deep, was ecstatic, hopeful, exposed, vulnerable, lonely, and yet you felt she could and would “change rainbows”.
This was a show to ‘change rainbows’, and you knew “people get over worse things” and you wanted her to succeed, and she did. Gloriously.