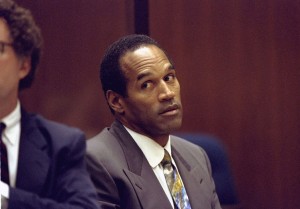 OJ Simpson's fall from grace was reality TV before the term was broadly coined.

The BBC Four showing of ‘OJ: The American Way’ was a must-watch across a week with such renewed interest in an American sports and movie hero ‘The Juice’ OJ Simpson.
Back in 1995, his trial for the murder of his wife Nicole was a television ‘trial of the century’. It made OJ an almost legend, a folk hero and opened wide the racial tensions exposed by the televised beating of Rodney King by LA police.
This series, using interviews with surviving participants, ‘talking heads’ and lots of televisual images and newsreels of the day open up again debate about the justice given to African Americans.
This continued where the drama series, ‘The People v OJ Simpson’ didn’t go and gave viewers the back-story of a college football hero who was a powerful athlete and a role model.
His adverts for Hertz Car Hire were amazing for their time, and I hadn’t seen them in such detail before. It was fascinating to see the footage and the preparation involved and how they made OJ more than a star but the stuff of legend. Television made Simpson a new type of American hero.
This series described as a social history of race, fame, sports and Los Angeles was pop-realism where a car chase galvanised the American public before the trial started.
OJ’s eventual fall from grace and fall from fame ended with him in Nevada Jail, and it was sad to watch. You wondered – OJ where did it all go wrong?