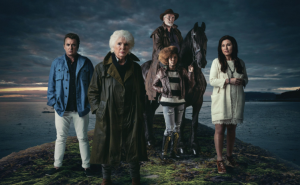 I must admit that 'Redwater' caught me somewhat by surprise.

The RTE One opener of ‘Redwater’, mostly filmed on location in Dunmore East caught me by surprise.
I was expecting a stage-Oirish soap and for a while, I was nodding my head in agreement with myself: a horse on a beach, people dressed as clowns doing some kind of race ending up in the sea and a character in the local pub reciting “up your hole with a big jam roll”.
I was too busy trying to recognise local faces like Roddie Cleere organising some sort of charity event with a megaphone in hand and I missed the dark symbolism of the opening drowning at sea in a prequel to the drama of Kat from ‘EastEnders’ coming to coastal Ireland. She was almost demented looking for a son she had given up for adoption over 30 years previously.
I had failed to grasp that the director of the first four episodes was Jasper Nielsen who made ‘Borgen’, a Scandi-noir thriller television series. I had met Nielsen in Dungarvan during the Celtic Media Festival last year.
I had failed to make the connection and didn’t join the dots that this was a darker harbour of fish, a dead seal, a mist from the sea (‘The Fog’) and more secrets than a confessional might hold and that the local priest was the abandoned son and a ‘doolally’ killer.