We found the Catalan equivalent of the Copper Coast.There is a national park out to the Cap de Crues, which is the most easterly point of the Spanish lands, next stop the Balearic islands, also populated by the Catalans.The road from Roses is quite narrow and up a mountain and not easy, as tour buses also use it.Cyclists did their best going uphill. Great views from the light house of the coastline and it is rough and jagged like the Copper Coast, with some cute coves and beaches. We stopped for the views and pictures at the light house, now automated. We drove back and were taken to a place like the Burren full of rocks called camels and all sorts of names due to their unusual shapes. They are like optical illusions and Dali came here for inspiration, fishing and swimming. 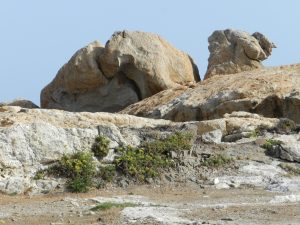 Club Med built a small resort here, called Paratge-de-Tudela, in the pre planning days but now abandoned with rusted steel in places.The area is now used for special walkers, kayakers and fishing. We walked in the warm September sun, looking at unusual plants and rocks. Now a national park they are getting rid of invasive species like rhododendrons and others to bring it back to previous times, a great idea, no Japanese knotweed here. Very eco-friendly we may say and a lesson for Ireland. Salamander run along the rocks and in places you smell rosemary bushes, Armeria de mar and Estepa Morrera.
The sedimentary rocks reminded us of Bonmahon and similar places in County Waterford.
It was onward then to Cadaques, a scenic seaside fishing village, like Dunmore East but bigger and more active, white washed houses, flowers over alley ways, it is really beautiful and does have strong summer season, best seen in spring and autumn to avoid crowds.
Like Baltimore in Cork, pirates destroyed the town and stole the townspeople. They would later build large walls and have a garrison, the famous pirate Barbarossa was here.
Visit the lovely St. Matthew Church built by local fishermen and they put in the baroque bronze altar, angels of protection there too. There is also an Irish Guinness connection with Jonathan and Sebastian Guinness having a home here, overlooking the village. Some locals get invited to parties here, his son now looks after it and Daphne Guinness is the sister.
Try the Casa Nun for food, you can get a room in the village here from 60 euro and the village is lively. Try the tuna salad and sardines. 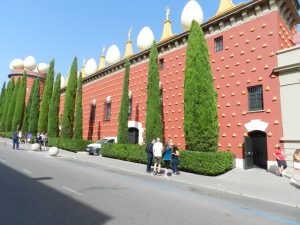 We were to stay afterwards in Roses, back closer to Figueres.The next day we would do a boat journey around this same coastline from Roses and is spectacular. It is like seeing the Copper Coast form a kayak.The other major thing to do is hike and also see the old fisherman hut turned into a cottage lived in by famous artist Salvador Dali in Port Lligat from 1930-36 with his partner Gala from Russia. Then he left for Paris, France and later left for America during the World War. After the war he would divide his time between there Port Lligat and Paris.
Much art on display, furniture, pictures with film stars like the Marx brothers, Luis Bunuel, Sinatra, Mae West and even Brendan Behan, whom he met in Paris. There is even some Mae West furniture honouring her body, some artefacts from a Paris brothel, and even a pool in the shape of a male penis, all rather bizarre, he was a one off without convention.
The town of Figueres has a very large museum that has to be visited if you are interested in art.At the opening gate is a Cadillac car that they used to drive across America and many of his art scenes from sculpture to painting, photography. He was an early adopter of new media and died in 1989.Book ahead for both as they get booked out.