Four Waterford musicians, including a brother and sister, will compete in the Final for the Seán Ó Riada Gold Medal in Cork this Friday, February 1st, which will be broadcast live on RTÉ Raidió na Gaeltachta.Rebecca McCarthy Kent from Tramore, siblings Sarah and Seamus O’Gorman from Ballinamult and Macdara Ó Faoláin from An Rinn, will be among the 17 finalists, competing on fiddle for the prestigious gold medal and a cash prize of €2500.
Tramore’s Rebecca McCarthy Kent is a multi-instrumentalist and plays both traditional and classical music and is currently undertaking an MA in Irish Music Performance in UL. Rebecca has won the Junior Fiddle of Dooney and is the 2011 All Ireland Fiddle Champion, the 2012 All Ireland Piano Champion and the 2017 Senior All Ireland Piano Champion. 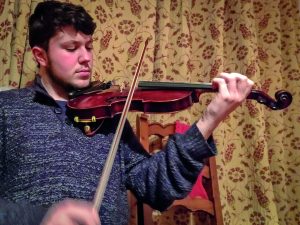 She has toured nationally as well as in Britain, Canada, Germany and France, Romania and Abu Dhabi with CCÉ Macalla Na hÉireann, Celtic Legends Productions and the National Youth Orchestra of Ireland. Rebecca teaches and co-ordinates the grupaí ceoil in CCÉ Tramore Comhaltas.Sarah O’Gorman (20) from Lisleagh, in Ballinamult is the eldest of five children who all play fiddle, including her brother Seamus (16) who is also through to the final.
Sarah has travelled to Britain, Canada and many European Countries performing and teaching fiddle, as well as teaching at many fiddle workshops throughout the country. Sarah is a member and teacher of the Comeraghs Comhaltas branch near Dungarvan and she also teaches her own students every weekend at home.
As well as fiddle, Sarah also plays harp and viola and she’s currently a student in Mary I in Limerick studying Irish and Music.Seamus O’Gorman has already a number of awards to his name, including the Ed Reevy Junior International Fiddle Champion 2017, third place in the Junior Fiddler of Dooney competition 2018, and the All Ireland Senior Grúpaí Ceoil Champions at Fleadh Cheoil na hÉireann 2015. Séamus also plays viola. He is currently a student at the CBS High School in Clonmel and will sit his Leaving Cert this summer. He is a very keen GAA player and has won a number of County titles with his local club.Macdara Ó Faoláin of An Rinn started playing the fiddle at the age of six, and enjoyed classes with Gearóid Ó Laoire, Peter O’Connor and Seán Ó Fearghail. 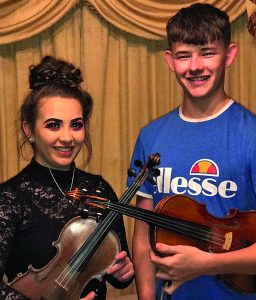 Ballinamult siblings Sarah and Seamus O'Gorman will also play in the Final.

His interest in the group Planxty then lead him to take up the mandolin and bouzouki, and the fiddle was laid aside for a time. However, when Macdara was in second year in school he took up the fiddle again, mainly because he was influenced by the playing of musicians such as Jessie Smith and Frankie Gavin. He’s currently a member of the group Nuadán and is studying at the Cork School of Music. Macdara’s brother Pax is also one of his big musical influences.

The final will be broadcast live on RTÉ Raidió na Gaeltachta this Friday
from 7 pm and will also be streamed live to the RnaG Facebook page.