The South Netherlands region of North Brabant is not an obvious place for a weekend break, but we happened to be there recently following a EU in Brussels and took in the time to see a different part of Europe, close to Ireland.We travelled with Aer Lingus to Brussels for business there, but there’s also an Aer Lingus link to Amsterdam, and Ryanair links to Amsterdam and Eindhoven at great prices. It’s great for a quick foreign break, where nearly all speak English.
Food is good quality and better value than home, accommodation is not expensive and transport is excellent and good value compared to trains in UK. 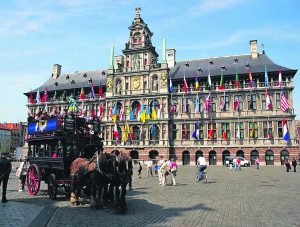 The favourite mode of transport for the locals is the bicycle and there are more bikes than cars in the various towns. They get priority over pedestrians and cars at traffic light junctions. Even on a night out, locals are out on the bikes.We joined the cyclists the next day as we rented a bike and joined the locals in the city of Tilburg famous for its latter day university but in the past was a famous wool and textiles Centre like Bradford or Halifax in the UK. Still some textiles made at the Textile Lab, where you can look at the Creative process of the designers (see the local Textile Museum) and buy some local products and see how textiles
machines operate. Studios and ateliers are open. Design is one of their talents in this part of the Netherlands.
Some large old mills have been converted to business start-up centres, community use and apartments as part of an urban regeneration plan.The Brabander and its DNA differ from the rest of Netherlands and is more like its Flemish neighbour in Belgium (home to the South Brabant region). The doors are always open, the people friendly and hospitable, ideal for visitors. This area has several towns that have merged form villages over the years and now there is a population of about a million living between the cities of Tilburg, Breda, Den Bosch and Eindhoven, all within a 20-mile radius of Tilburg with Rotterdam only a half hour away by train. Outside of Dublin there would be no place in the Republic as densely populated. The Netherlands has 17 million people in an area 60 per cent the size of Ireland. 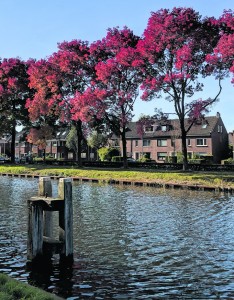 Most people live in apartments or terraced housing, but like Ireland there is a housing shortage at times, more so in the bigger cities. They are a practical people and space is well utilised; we can learn much from them and their way of life in urban areas.In Tilburg, the move towards urban regeneration is evident around the railway station (Spoorzone), where warehousing has been converted to art centres, pubs and restaurants. The area is home to restaurants such as De Houtloods, where we had a phenomenal dining experience. We’d recommend a four course meal there for €40 where one can watch the staff working away in an open kitchen with wine at €5 per glass of matching wine pairing, serving fish, beef with chestnuts, lemon steak and much more besides.
Staff come from a great catering school nearby and all were young and keen. Manager said some staff worked in a Michelin star in restaurant but prefer there as they can experiment more and are under less pressure from customers but was up at that level. It was an education for us to dine in what was a former timber yard near the train station. With a near 200,000 population, Tilburg has re- invented itself from a mill town to the transition town of high quality education and university to a tech and services sector. We also noted in Tilburg how there is an emphasis on attracting to labour and people to the city, whether they be students, or workers. Even migrant workers from other countries are made feel welcome at a special welcome centre run by an NGO organisation that is self financing.Another part of the city success is the emphasis on sport and culture. The city has much in terms of the arts our guide or local hero Yvonne Maclean, whose Dad is Scottish, and is involved in rock music management, told us how the city of Tilburg has a rock academy, a dance academy and a theatre school, a circus school, international cinema and a number of rock and jazz venues.
Shopping is also good for consumers with many local boutiques and department stores, including the Hudson’s Bay Company from Canada.
Quaint stores and special cafes all add to the character of a town and Tilburg has it. There was even a fine record store; bike shops abound and there are even multiple areas with one hour bike parking – you get a ticket if you are late. At night you park the bikes underground where they are stored. Some good ale houses also serve the special monks’ Trappist beer which is brewed just 6km away in an old monastery where over 20 monks work on a farm called Adbij van Koningshoeven, make candles and honey and brew beer their highly sought after beer. Located in nice tree lined gardens, this is a great spot for lunch at the weekend. It’s a real treat and comes highly recommended, a 90-minute tour of the brewery costs €12 and includes a tasting. Our guide Tony was hilarious and even asked would any of the group join up as they need new monks with some as old as 85 while the youngest is aged 35. They have a joint venture with a large brewery in place and brew larger amounts nowadays.
We also came across a special evening that weekend that we visited, titled ‘Popronde’ where 40 bands from different cities in Holland all come to one town and perform in various bars
and venues.
They are usually up and coming bands , who get paid minimum wage for playing in the event pubs and is backed by the Government and local councils.A total of 50 Dutch cities are on the schedule from summer to early October, giving bands great exposure.Local bands are not allowed play in home towns but in nearby places, one musician we met had played in two bands that night in Tilburg.Ireland could do a similar event very well and this would provide a boost some for smaller towns through music (Tramore, New Ross, Carrick-on-Suir, etc).
Piushaven is an area along the canal worth visiting for eating and you can also try the Anvers cafe in the shopping area and Kandinsky for good beers. There’s also a nice Mercure hotel near town centre and IBIS, with others located just off the Ring Road. The town had a nice Scandi furniture exhibition in the Textiles Museum, plus a fine contemporary art museum named De Pont.
The famous Vincent Van Gogh lived in the area as a youth and went to school there when his father was a vicar or parson there for a few years – a plaque hangs at his former home.
Other things we noted from this short stay in Holland was how electronic payments are taking over from cash with some shops, pubs and restaurants only doing card payments.
We also noticed the extensive amount of windmills (as you would expect in The Netherlands) and solar panels even featuring along motorways and train lines. Electric bikes and cars are also popular with older people and zip cars are available for rent too. Many young adults do not own cars these days and use the zip cars at weekends for just €3an hour.
Another thing we noted was the push for young people to get involved in start ups and get support from their local council to establish a premises in former warehouses. There are many special programmes for start ups; being a university town many young people want to kick off a start- up after leaving college rather than apply for a job. Perhaps Ireland may follow suit over the next three to five years. More Irish students are going to study in Holland through English as it’s cheaper than the UK and this trend looks set to grow given the steepness of UK fees.