Home » Entertainment » Theatre » “Into The Woods” Proves Another Carrick Triumph

“Into The Woods” Proves Another Carrick Triumph

Carrick-on-Suir Musical Society is celebrating 75 years of being central, in musical terms, to a community that has seen the rise and fall of post World War II economic and social development. Over those years they established a significant reputation for musical theatre and they excelled themselves with an operatic telling of Stephen Sondheim’s ‘Into The Woods’. This was a tour de force of ensemble sung musical narrative that took the audience on a journey, an almost three-hour journey, into their fears and expectations. Once you start, there is no going back. 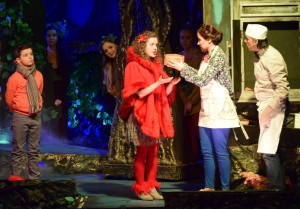 In Act 1 you got an almost conventional storytelling of a fairytale about a quest to seek out a white cow, a hank of yellow hair, a golden shoe and a blood red cloak.
A childless Baker and his Wife have to placate a Witch (a neighbour from Hell). In a sense, characters got what they wished for once upon a time.
But in Act 2, all the darker, more psychologically frightening aspects of denial, betrayal, death, Giants in the sky and a female giant on the rampage. The stage shook, I shook and was carried along in a telling tale of consequences. Be careful what you wish for. Love can become hurt in the turning of a leaf or a corner; you can get lost in more ways than a compass can help you.

Liam Butler’s direction was confident, controlled and had wonderful clarity. Clarity of intention, clarity of exposition and clarity in the choices he made and the roles he cast. There wasn’t a weak character in this catalogue of performances.
He chose the ‘newer’ version where the Narrator is a child and Cristian Nolan was brilliant with clarity and a knowing innocence. (he alternated the role with Cormac Hennessey). Ray Nolan was excellent as the at times diffident and frightened Baker but he brought out the ‘uncertainty’ many of us feel in the ‘woods’ of our lives. His ‘No More’ with the Mysterious Man was a joy of reconciliation.Sandra Power was splendid as The Baker’s Wife. She has the multi-faceted aspects of a compelling character and she knew the end has to justify the ‘beans’ and the means. It is not always a fairytale world. Her ‘Moments In The Woods’ was amazing. 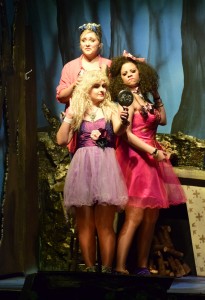 I must mention John Power who sang and acted his heart out, often half-hidden behind a tree. Irene Malone exceeded my considerable expectations with a superb whirlwind of The Witch. She caught the mood with ‘Our Little World’ and was magnificent in ‘Witch’s Lament’, and the closing ‘Children Will Listen’.
Louise Mulcahy was so good as Cinderella and the duality of her role was surpassed by her maternal care for the child and the ‘child’ within us all. She shone in ‘No One Is Alone’David O’Donovan was a treat as Jack, the ambitious ‘fool’ who nearly toppled the Kingdom and survived, showing that even dodgy decisions can grow beanstalks. Pat Quinn-Bolger was fantastic and earthy as Jack’s Mother while Chris Hanlon had lupine carnality as The Wolf.
Peg Power was the Voice Of The Giant. Keith Greene-Dwyer was wonderful as Cinderella’s Prince and his ‘Agony’ duet with Dermot Keyes as Rapunzel’s prince was a vocal highlight and I don’t think I have ever heard Dermot in finer voice.